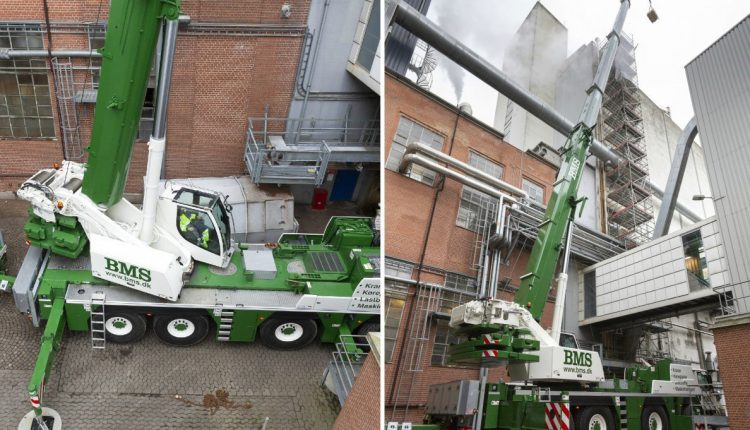 Liebherr LTM 1090-4.2 with 60-metre telescopic boom shows what it can do on constricted sites

The variable support base for Liebherr mobile cranes, VarioBase® is established in practice is a solution to space problems on sites. The feature developed at the Liebherr Plant in Ehingen allows the flexible use of restricted set-up space. On two exemplary job sites in Denmark and Switzerland it becomes apparent that VarioBase® has become an integral part of everyday work with mobile cranes.

The first job site, Switzerland: A new solar power system had to be installed on the roof of a detached house in the Canton of Aargau between Basel and Zurich. The site at the edge of the town borders on fields and on the neighbour’s garden. Both of these areas would have been required to support a mobile crane in full, but permission to use them was not forthcoming.

It was a clear case for the dispatchers at crane contractor Zaugg – the family-run company based in the Canton of Berne sent the smallest crane equipped with VarioBase® in its fleet to the site. This meant that the LTM 1090-4.2 was slightly too large a mobile crane for the load case, but the restricted conditions on the site no longer posed a problem.

On arrival, crane driver Fritz Grossen positioned his vehicle with the rear towards the building. Both the outriggers at the rear for supporting the crane could be extended to their full length without any problem. But at the front of the crane, where the site bordered on a field and garden, the supports were only telescoped to 39 and 45 percent of their full length. No more was needed because the crane could do the work on the roof via its rear with a large radius. 20 minutes after his arrival, the LTM 1090-4.2 was ready to go and hoisted the solar panels and installation material onto the roof – mission accomplished.

The second job site, Denmark: Over one thousand kilometres further north, another crane driver was also struggling with difficult site conditions. A Liebherr mobile crane of the same model had just arrived at the site in Aarhus, Denmark. A metal belt for an elevator had to be hoisted to the fitters around 50 metres in the air in a food manufacturing plant. The load only weighed around one tonne. In this case there was a small external step and a permanently installed container which meant that extending the supports the front of the crane to their maximum extent was not possible.

But Klaus Nielsen, a driver with Danish crane contractor BMS, was not worried at all about the lack of space. Once again the supports partly telescoped to 33 and 41 percent saved the day. Nielsen had previously manoeuvred his crane and its trailer into position very accurately backwards through a narrow alley. The mobile crane carries ballast slabs, chocks and a second hook block on this twin-axle trailer. This means that it can normally complete all the jobs assigned to it – a massive financial benefit. Another benefit is that Liebherr gave its new 90-tonne mobile crane a 60 metre telescopic boom – ten metres longer than the predecessor. For the job in Aarhus, this meant that the load could be transported to its destination without the use of a lattice jib.

After the job was completed, the LTM 1090-4.2 return to its base in Hinnerup, 20 kilometres away. There are 14 mobile cranes at the BMS branch there – all of them supplied by Liebherr. With around 120 mobile and around 20 crawler cranes, BMS is the largest crane contractor in Denmark with other sites in Sweden, Norway and Poland.

Liebherr set a whole new standard when it unveiled its variable support base from mobile cranes at the Bauma construction machinery trade fair in Munich in 2010. VarioBase® features in almost all mobile cranes with a Liccon2 control system which leave the plant in Ehingen, if the customer decides on it. In terms of maximum flexibility, the performance of this support system developed by Liebherr is unique on the market.

Continue Reading
Liebherr-Werk Biberach GmbH
3,687
Share LinkedinTwitterFacebookEmailWhatsApp
Subscribe to our newsletter
Sign up here to get the latest news, updates and special offers delivered directly to your inbox.
You can unsubscribe at any time