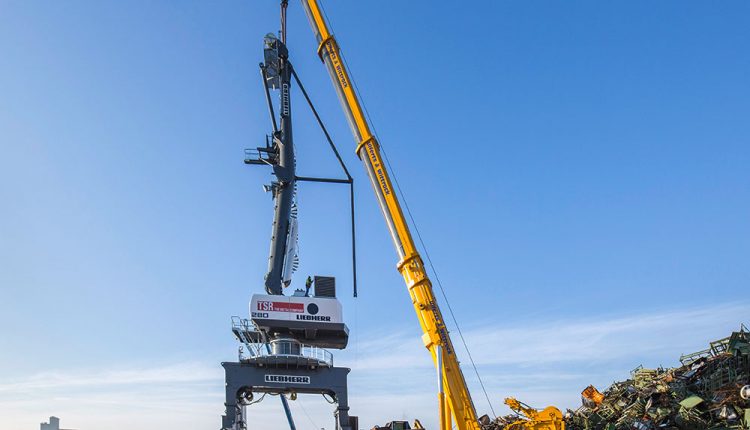 At the beginning of this year, crane and heavy haulage contractor Ulferts & Wittrock assembled a Liebherr LPS 280 portal slewing crane for handling scrap metal in Bremen. A Liebherr LTM 1500-8.1 mobile crane was used for the heaviest loads. The constricted conditions on site proved a major challenge.

Liebherr LPS series portal slewing cranes are handling machines with a small footprint and are therefore mainly used where space is at a premium. But this then makes the assembly of the machines, which weigh hundreds of tonnes, an even bigger challenge. Crane and heavy haulage contractor Ulferts & Wittrock based in northern Germany, was asked to assemble a Liebherr LPS 280 portal slewing crane with a maximum lifting capacity of 84 tonnes for handling scrap metal at Bremen’s industrial port, a job which involved hoisting heavy loads in a highly constricted area.
Heiko Ramke, from the External Technical Service Team for Large Cranes at Ulferts & Wittrock, who handled the control levers of the LTM 1500-8.1 himself for some of the time, explained the situation on site. “The size of the area available meant that it was not initially possible to assemble the portal slewing crane on the rails. Initially the travel gear supports were assembled with the cross carriers and this total load of 115 tonnes was then moved around 2.5 metres by three cranes, the 500-tonne LTM 1500-8.1 and two 200-tonne machines and hoisted onto the travel gear which had already been placed on the rails.” Two weeks later the portal crane’s boom was assembled by a tandem hoist by a 130-tonne and a 160-tonne mobile crane.

Managing Director Marcus Wittrock was delighted by the excellent collaboration with the Liebherr assembly team: “We formed an excellent team with Liebherr, a great working relationship and clear communication. It was a real pleasure – despite the icy temperatures.”
Ulferts & Wittrock is a sister company to Ulferts and the Wittrock Group which provides a complete range of services for mobile crane and heavy haulage logistics, heavy assembly work, company relocations and the rental of work platforms, telescopic handlers, forklift trucks and miniature cranes.

Continue Reading
Liebherr-Werk Biberach GmbH
401
Share LinkedinTwitterFacebookEmailWhatsApp
Subscribe to our newsletter
Sign up here to get the latest news, updates and special offers delivered directly to your inbox.
You can unsubscribe at any time
Leave a comment