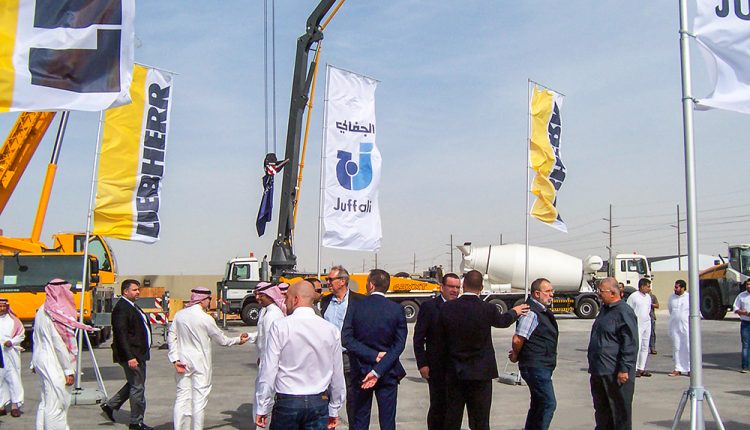 Fast, good quality service all over the world – this is one of the main factors behind Liebherr‘s success. To further improve its services for customers in Saudi Arabia and neighbouring countries in the Middle East, Liebherr has built a new subsidiary in Dammam, the capital of the “Eastern Province” which was officially opened in November with a large number of customers in attendance. The newly erected buildings will house sales and service staff from the Mobile and Crawler Cranes, Deep Foundation, Tower Cranes and Concrete Technology Product Divisions.

Liebherr has had a presence in Dammam for the last 12 years. The company had outgrown its old offices in rented buildings, however. To enable it to react even more quickly to market and customer needs, Liebherr decided to build its own office complex which meets European standards. The new, more modern facilities now provide more warehousing space to enable improved spare parts supplies and greater availability of parts in general. They include air-conditioned warehousing areas, for example for electronic and rubber parts. In addition a warehouse for particularly large components has also been erected.

The new complex with around 30 staff also enables the company to deliver better after-sales and repair services for Liebherr customers. The fully equipped workshop area is big enough even for large cranes. Some areas are air-conditioned and a welding station rounds off the range of services.

Saudi Arabia is one of the main markets for Liebherr in the Middle East. Liebherr has had its own employees there for 35 years. Its headquarters are located in Jeddah and Liebherr also has offices in Riyadh. The new complex in Dammam took just 14 months to build and represents a clear commitment by Liebherr to its local customers and partners and its long term confidence in the market even though it is currently going through a tough period with investment being extremely slow as a result of the low oil price.

Continue Reading
Liebherr-Werk Biberach GmbH
560
Share LinkedinTwitterFacebookEmailWhatsApp
Subscribe to our newsletter
Sign up here to get the latest news, updates and special offers delivered directly to your inbox.
You can unsubscribe at any time
Leave a comment