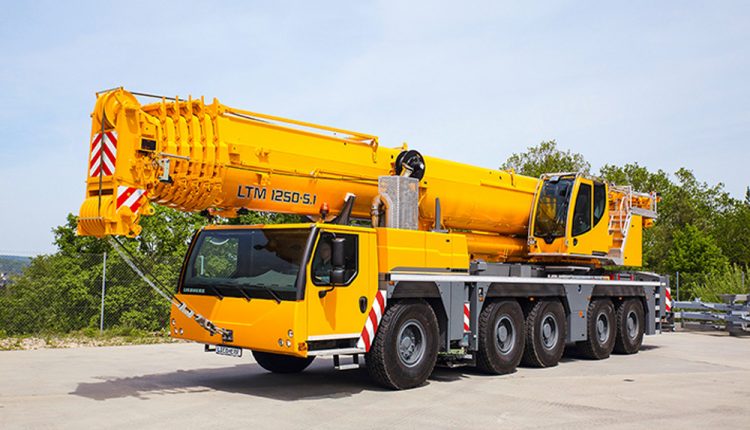 Liebherr shows the 250-tonne mobile crane LTM 1250-5.1 at Bauma Conexpo India. The LTM 1250-5.1 is the most powerful mobile crane on 5 axles on the market. It is the third crane model on which Liebherr uses its innovative single-engine concept. In addition to a multi-functional folding jib, a 50 m fixed jib is also available. The Liebherr innovations VarioBase® and ECOmode mean that crane operators can use the LTM 1250-5.1 with even more safety and efficiency.

Powerful, variable boom system
The LTM 1250-5.1 is the successor to the global success model LTM 1220-5.2. In the development of the new crane Liebherr followed the concept of achieving maximum load capacity from the available weight of a 5-axle mobile crane. The result is that the LTM 1250-5.1 is the most powerful crane in its class in the world. Its load capacity has been increased compared to its predecessor by around 15% – 20% whilst the telescopic boom has remained at the same length of 60m. With lattice extensions the maximum hook height has been increased by a massive 9m to 110m.

One feature that has been unusual in the 5-axle class to date is the possibility to mount a long fixed jib which, for example can achieve enormous radii over buildings. Liebherr has created a particularly smart solution for this. It is now possible to achieve a fixed jib of up to 50 m in length with just one additional TF adapter (connection between the telescopic boom and the fixed jib), a reducer section and a head. The existing telescopic boom extensions and folding jib extensions are used for this purpose. This jib is generally hydraulically adjustable between 0° and 45° and can therefore be used like a luffing jib.

VarioBallast is a new feature for Liebherr. The LTM 1250-5.1 can be operated with two different ballast radii: 5.58 m or 4.78 m. Liebherr has designed a solution to adjust the ballast radius particularly quickly and easily. The ballast radius is reduced by 800 mm using standard mechanically swivelling ballasting cylinders. This solution is a major benefit of the new 250-tonne model for use in constricted conditions.

Time-tested chassis technology
A six-cylinder Liebherr diesel engine in the undercarriage which develops 400 kW / 544 bhp and torque of 2,516 Nm, provides the LTM 1250-5.1 with all the power it needs. The engine meets the Stage IV / Tier 4f emissions regulations.

The power is transferred to the crane’s axles by the 12-speed ZF-AS-Tronic gearbox. A two-stage distributor gear permits minimal creeper speeds in manoeuvring mode. The intarder, a zero wear hydrodynamic brake integrated in the gearbox, acts as a retarder. In addition a Telma eddy current brake is available as an option. Like almost all LTM mobile crane models, the LTM 1250-5.1 is fitted with pneumatic disc brakes. The rear axles on the 250-tonner have active electro-hydraulic steering depending on the vehicles speed. This increases the manoeuvrability of the vehicle and drastically reduces tyre wear. Five steering programmes can be conveniently selected at the touch of a button.

A mechanical shaft ensures particularly high efficiency levels and low engine speeds in the chassis engine, providing sufficient power for crane work. This ensures the economy of the new concept in terms of fuel consumption. The benefits of not having a separate superstructure engine include reduced maintenance work and lower weight. The lower weight can be used for load-bearing components, thus increasing the crane’s load capacity.

ECOmode for more efficient mobile crane use
An add-on program has been developed for the crane drive concept with just one engine and a mechanical shaft, allowing the machine to be run with particularly low fuel consumption. This means that complete pump drive can be automatically disconnected when the engine is idling and reconnected through the intelligent controller in a matter of seconds when it is required.

Liebherr has also developed a special mode for mobile cranes in the load-sensing range to reduce the cost of crane use whilst also reducing noise emissions. ECOmode minimises both fuel consumption and noise emissions when operating the crane superstructure.

Continue Reading
Liebherr-Werk Biberach GmbH
407
Share LinkedinTwitterFacebookEmailWhatsApp
Subscribe to our newsletter
Sign up here to get the latest news, updates and special offers delivered directly to your inbox.
You can unsubscribe at any time
Leave a comment