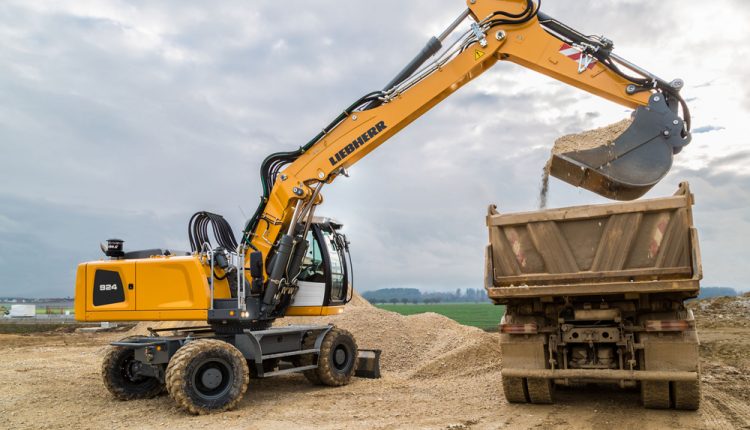 Liebherr is represented at the 10th Steinexpo 2017, the International Demonstration Show for the Construction Materials Industry, both with an exhibition stand and with machines in the demonstration area. From August 30 to September 2, in Homberg/Nieder-Ofleiden Liebherr presents special machines such as mining excavators, crawler tractors, and other machines for use in quarries.

The machine on display has a 2750mm wide undercarriage with dozer blade at the rear and has a heavy counterweight which allows higher lift capacities. The equipment includes a 5.80m long adjustable boom with central lubrication and a 2.65m dipper arm with the Liebherr SWA 48 quick coupler system with LIKUFIX, as well as a SG 30B stone tongs with a capacity of 0.85m³. The PowerLift option also included in the configuration ensures higher lift capacities in the immediate vicinity of the machine and thus increased productivity.

Efficient thanks to the compatible tool attachment/implement
The SG 30B stone tongs is a special version of the sorter grab for the safe and efficient movement of large stones and blocks of stones. Here Liebherr also uses a very high proportion of components produced in-house. The large slewing ring and the massive hydraulic cylinder, as well as the inner hydraulic lines for attachment with LIKUFIX, ensure a longer service life of the tool attachment/implement. The buckets are secured to the mounting with Passfix bolts. The sealed and play-free bearings guarantee high reliability.

Liebherr invested in the stability of the new large wheel loaders in order to prepare them for the tough conditions in the mining industry. The power-split XPower travel drive stands for robustness as the power is delivered by the interaction of two drive paths. The load is distributed to two drive paths and the components have a significantly longer service life.

Furthermore, each XPower wheel loader has stronger axles compared to the predecessor generation. In some cases even the axles of the next model up. Besides the axles, Liebherr has strengthened other core components such as the hydraulic cylinder. This way Liebherr guarantees the consistently high performance and reliability of the XPower wheel loader.

As part of the upgrade of the entire Liebherr crawler excavator range in 2016, the R 980 SME was equipped with a new engine which now delivers a power output of 420kW / 571hp. Thanks to the new engine with Liebherr SCR technology (selective catalytic reduction), the crawler excavator conforms to exhaust emissions stage IV / tier 4 final and without having a diesel particulate filter installed. As a result, both the maintenance time and maintenance costs are reduced for the customer.

Continue Reading
Liebherr-Werk Biberach GmbH
890
Share LinkedinTwitterFacebookEmailWhatsApp
Subscribe to our newsletter
Sign up here to get the latest news, updates and special offers delivered directly to your inbox.
You can unsubscribe at any time
Leave a comment