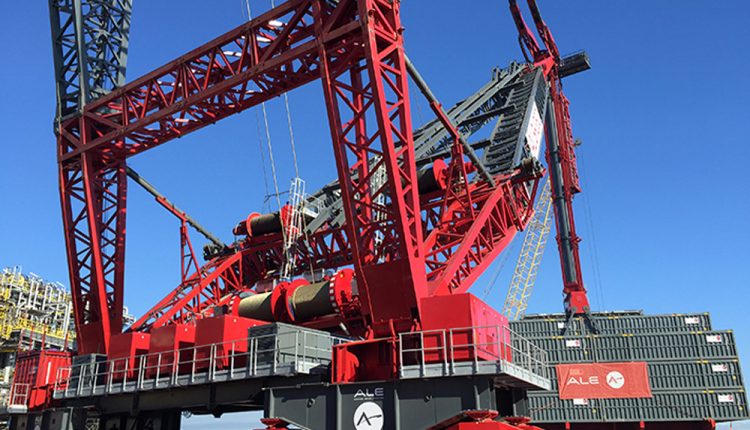 Liebherr Components demonstrates its expertise in the field of winch systems, supplying gear ring rope winches with electric motors for an onshore crane with one of the world’s largest lifting capacity.

The AL.SK350 crane is a creation of ALE, a global leader in the market for heavy and specialised transport. It is designed for ultra-heavy loads of up to 5,000 tonnes and is used for lifting ultra-heavy modules onto FPSO (floating production storage offloading) installations. These are tanker-like vessels developed to lift heavy modules onto vessels moored at underwater wells for temporary storage or for crude oil treatment. The rail-mounted crane has a 49-metre ballast radius and an A-frame main boom of 130 metres on a stable 18-metre wide base. For lifting loads, Liebherr has developed two winches with the pulling force of 600 kN per winch, weighing 25 tonnes each. Each of the two systems is 5.5 metres long, 2.5 metres wide and 2.5 metres in height, which makes them ideally suited for shipment in a container. The only difference between the two winches is the direction of winding, thereby ensuring that the rope is wound and unwound symetrically.

Four electric slew drive combinations actuate the winches. All winch components are developed and produced in Liebherr’s own factories and are internally compatible. The torque generated by this drive combination is substantially higher than in conventional planetary plug-in gearboxes. The torque is transferred straight to the gear ring, which is mounted directly on the winch drum. The winch is lubricated continuously by a central lubrication unit.

This low maintenance and unique design is the product of Liebherr’s years of experience and know-how in large winch construction for lifting applications. The winch system was designed and produced in collaboration with ALE according to customised specifications. The crane has already been successfully rigged, load tested and put into operation. This giant piece of machinery is presently being used for lifting, transporting and installing approximately 40 heavy load modules in P-74 FPSO facilities in the south of Brasil.

Continue Reading
Liebherr-Werk Biberach GmbH
481
Share LinkedinTwitterFacebookEmailWhatsApp
Subscribe to our newsletter
Sign up here to get the latest news, updates and special offers delivered directly to your inbox.
You can unsubscribe at any time
Leave a comment