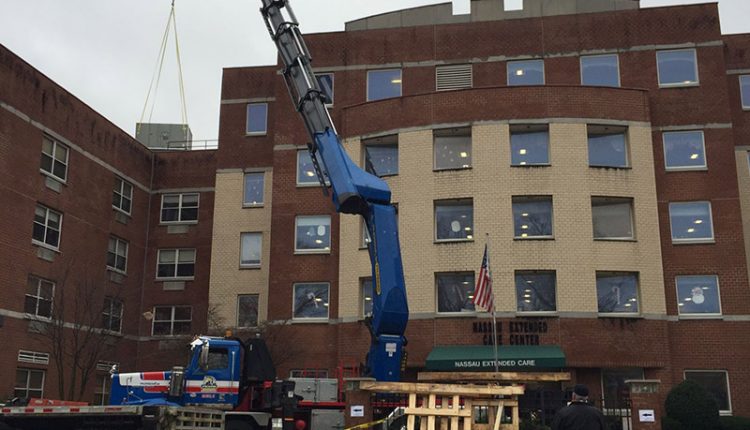 With a fleet of knuckleboom cranes at work, it isn’t often that the crane owner can be found operating one of his newest machines. But “sometimes the boss has to,” says Pinchas Leitner, owner of knuckleboom rental company Lifting Solutions, Brooklyn, N.Y.

Tasked with replacing HVAC units on the roof of an extended-care facility, Leitner used his second Palfinger PK 200002 L-SH rig to deftly pick the old machines off, and land the new ones onto, the 55-ft. high roof. Some of the new units had radii of 130 ft., he said.

Palfinger delivered the first PK 200002 L-SH in the United States to Lifting Solutions after ConExpo 2014. The 88,000-lb.-capacity knuckleboom crane, on display at the at the trade show in Las Vegas, was mounted on a Western Star 4900 TS chassis with twin steering axles and a Detroit Diesel 530-hp engine.

“The PK was totally stable, even when we lifted toward the front,” Leitner said after the rooftop job this month. Not often at the PK controls, he added, “It has amazing load control—I had a blast doing the job.”

Continue Reading
355
Share LinkedinTwitterFacebookEmailWhatsApp
Subscribe to our newsletter
Sign up here to get the latest news, updates and special offers delivered directly to your inbox.
You can unsubscribe at any time
Leave a comment