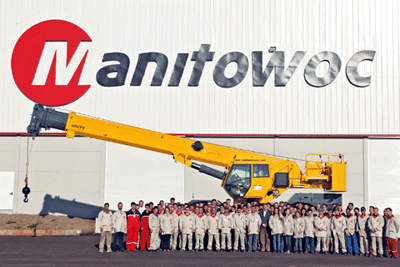 Brazil’s push to expand its infrastructure is gaining new momentum in 2015 as hundreds of large-scale projects—including dams, high-speed rails, roads, energy generation plants, mines and industrial farms—are planned or already in progress throughout the country. Anticipating the development, Manitowoc built a modern 82,000 sq. ft. facility in 2012 in Passo Fundo, in the southern state of Rio Grande do Sul. The factory is the first of its kind in Latin America, supplying Grove rough-terrain cranes and, more recently, Potain tower cranes.

According to Lauer, the Grove crane will remain at the public transit development site until mid-2015. The 10-mile-long railway will have six stations and will transport 300,000 passengers a day starting next year. The line will greatly benefit daily commuters and international visitors for the 2016 Summer Olympics, hosted by Brazil.

The consortium in charge of the subway extension chose the RT due to its versatility, according to Fernando Vianna Lauer, owner of Lauer Machinery and Engineering. “We’ve been able to show contractors how versatile a Grove RT765E-2 can be—the applications are endless,” he said.

As the crane prepares to wrap up work on the subway project, Lauer is already planning which project it will take on next. The crane’s ability to perform well in a diverse range of job sites gives Lauer much flexibility. Responsive after-sales services teams both at the Manitowoc Passo Fundo factory and among four other locations in Brazil, is one of the most advantageous aspects of owning a Grove crane in the country, Lauer attested.

“We’ve been impressed by the prompt responses we get from Manitowoc Crane Care’s service team when we contact them,” he said. “We’ve reach out to Manitowoc Crane Care twice: once regarding additional information on the RT765E-2 and once about requesting technical support. In both instances we received extremely fast and thorough service.”

Continue Reading
Grove CranesManitowoc
382
Share LinkedinTwitterFacebookEmailWhatsApp
Subscribe to our newsletter
Sign up here to get the latest news, updates and special offers delivered directly to your inbox.
You can unsubscribe at any time
Leave a comment