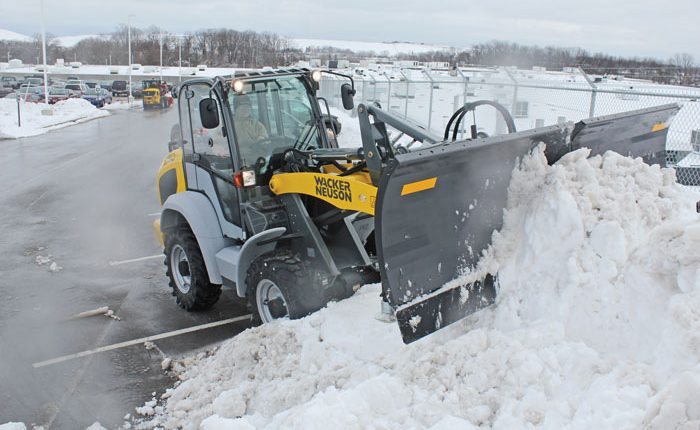 Maintenance of Loaders in Winter Season

I. Use a Quality Antifreeze
A quality antifreeze has its freezing point at -60 ℃ and boiling point at 108 ℃.
Scale and rust phenomenon are found in 65% cooling systems, which seriously affect the heat dissipation. So, before replacing the antifreeze, it is better to clean these scale and rust first.
Don’t mix different antifreezes together. It may cause chemical reactions, precipitation or bubbles.

III. Cooling System Corrosion-resistant Filter Cartridge
This filter cartridge contains additives such as ion exchange resin, anti-corrosive agents, magnesium powder, which provide effective protection.
When change the antifreeze, replace the filter cartridge together. It shall be replaced at an interval of each 1000 engine working hours to ensure its effectiveness in corrosion protection.

IV. Fuel Lines Maintenance
(1) Use proper fuel
Choose the fuel according to local temperature and diesel’s cold filter plugging point and freezing point.
(2) Keep fuel lines well maintained
Thoroughly clean up the oil-water separator and keep it with a clean look. Check sewage indication and drain the discharge the impurity in a timely manner. Replace the stained fuel, remove sediments and wash the fuel tank.
(3) Replace the fuel injection nozzle which makes a poor atomization.

VI. Inspection of Three Kinds of Leakage
Expansion and contraction phenomenon along with the season changes can be found on seal parts, especially the rubber O-rings and rectangular rings, in hydraulic and pneumatic systems. At a temperature consistently lower than 0 °C, especially close to -10 ℃, leakage of oil, air or water may occur. So, before entering the winter season, an overhaul for leakage is a must to eliminate such potential problems.

VI. Electrical Equipment Inspection
Failure in starting those aging machines in winter seasons is normal. So, inspection and replacement of the aging electric wires and components are the must before each winter season. The battery check shall be one on your work list.
Don’t forget to check and restore the heating system if the radio tells an unusually cold winter season is coming.

Continue Reading
285
Share LinkedinTwitterFacebookEmailWhatsApp
Subscribe to our newsletter
Sign up here to get the latest news, updates and special offers delivered directly to your inbox.
You can unsubscribe at any time
Leave a comment