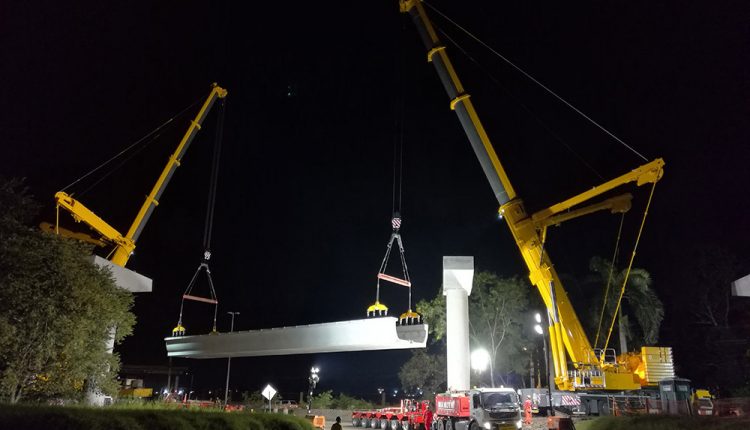 Ehingen/ Donau (Germany) March 2017 – Colombian crane contractor Mamut de Colombia is currently working on the construction of metro line 2 in Panama City. This involves two Liebherr LTM 1500-8.1 mobile cranes and a Liebherr LTM 1400-7.1 crane hoisting a total of 1640 U-shaped concrete beams weighing up to 161 tonnes onto prefabricated pillars by the end of 2018.

The current population of Panama City, the capital of Panama, is around 3.35 million people. To date, Panama City has only had a single metro line. As a result of heavy traffic and the resulting pollution, Panama City council decided to build a second metro line. This will have a total length of 21 km and will run between San Miguelito and Nuevo Tocumen. There will be 16 stations along the full route with links to existing bus lines and taxis. When it is completed, the metro line will be able to carry 16,000 passengers per hour.

As a result of the heavy traffic during the day, the U-shaped beams measuring 20 and 30 metres in length and five metres in width, have to be hoisted into place during the night. As from 10 pm the main road is closed and the men from Mamut move the assembled mobile cranes into position. A maximum of two U-shaped beams can be hoisted into place and installed during a night shift which lasts until 5 am.

Mamut de Colombia, based in Tocancipa near Bogotá operates around 50 cranes. Its main activities comprise crane work and heavy haulage for industry and the electrical, mining, oil and construction trades.

Continue Reading
Liebherr-Werk Biberach GmbH
420
Share LinkedinTwitterFacebookEmailWhatsApp
Subscribe to our newsletter
Sign up here to get the latest news, updates and special offers delivered directly to your inbox.
You can unsubscribe at any time
Leave a comment