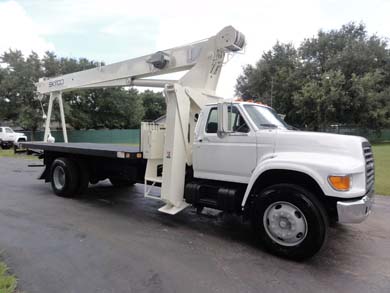 Manitex International Inc., Bridgeview, Ill., announced that it has received $6.2 million in new orders for CVS and Badger Equipment products.  Delivery is scheduled for second half 2012 and first half 2013.

The Badger order is for a new 50155GT 50-ton rubber tracked crane that will be used by an international copper and gold mining company. The order for this crane, which combines the Manitex 50-ton boom and Badger upper crane structure, marks the launch of a new product for Badger and Manitex, and adds to the company’s specialized crane offerings. According to Manitex, capacities are similar to the truck-mounted version, but the ground-bearing pressure of the rubber tracks is reduced to 4 to 6 psi.

Ed Samera, general manager, Badger, commented: “This exciting combination of Badger and Manitex engineering is targeted at the niche mining and power line construction and maintenance sectors. The 50155GT addresses specific operating environment challenges faced by much of the mining industry since it is designed to provide higher lifting capacities and perform in the highly challenging, marshy conditions that are typical of much terrain at mining sites. Additionally, the 50155GT can extend its boom to a height of 200 feet and is compliant with stringent Department of Natural Resources requirements. Consequently, we anticipate that this product will also be ideal for use in power line construction and maintenance applications, which is another area that we believe will experience substantial growth during the next several years.”

The CVS order is a follow on order from South Africa for a fleet of new terminal tractors (previously announced on April 11, 2012) which now has reached $8 million for a newly launched product with this dealership.

Continue Reading
564
Share LinkedinTwitterFacebookEmailWhatsApp
Subscribe to our newsletter
Sign up here to get the latest news, updates and special offers delivered directly to your inbox.
You can unsubscribe at any time
Leave a comment