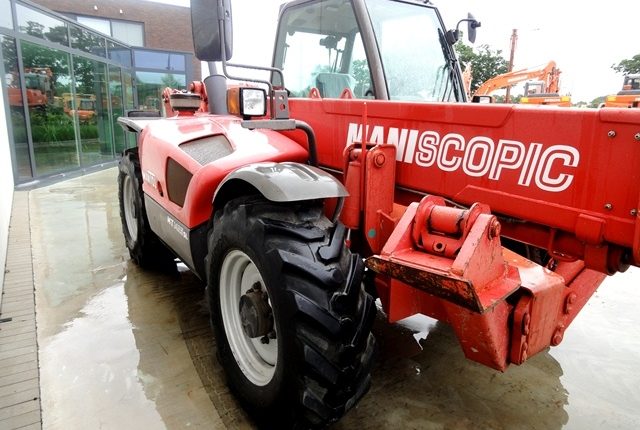 Manitou has announced profits up 40%

Manitou has announced first half profit numbers which show net earnings up 40 percent to €21 million.
As previously announced, overall revenues climbed almost 20 percent to €672 million.
Looking at the main divisions Rough Terrain Handling – which makes up the largest sector and includes telehandlers and access equipment – saw margins slip as operating income increased 12 percent to €23.2 million on revenues up 19 percent to €473 million.

The company’s net debt increased almost 60 percent during the period jumping from €92 to €147 million, due to the production ramp up and a large pre-purchase of engines.

Chief executive Jean-Christophe Giroux said: “The first half delivered good progress on our financial performance, and that’s an accomplishment in today’s economy. At the same time, that progress has been slower than expected, as margins get affected by a combination of new elements, either current or more structural.”

“On the current side, we registered some one-off costs due to the RTH lead time reduction effort, new product launches and external events such as the Festival or Open Up. It also suffered from certain difficult supplier situations and overall negative purchasing variances. On the more structural side, we now face a fuller impact of new regulations and need to accelerate our efforts to adapt to the new environment and industry realities.”

“Traditional cycles are now blurring into volatile and contrasted situations, but it does not impact our strategy nor our ambition to double our size -we just have to deploy greater flexibility and adapt to shifting horizons. And we are already adjusting our workforce and initiatives to match a possibly conservative demand plan for 2013, while sustaining all efforts to improve our operational performance.”

The company also announced the appointment of Fabrice Beslin as president of the Industrial Material Handling Division, replacing Jean Louis Hervieu who is retiring. Beslin joined Manitou in 2005 and was promoted to Industrial deputy president a year ago in preparation for the change over.

Continue Reading
374
Share LinkedinTwitterFacebookEmailWhatsApp
Subscribe to our newsletter
Sign up here to get the latest news, updates and special offers delivered directly to your inbox.
You can unsubscribe at any time
Leave a comment