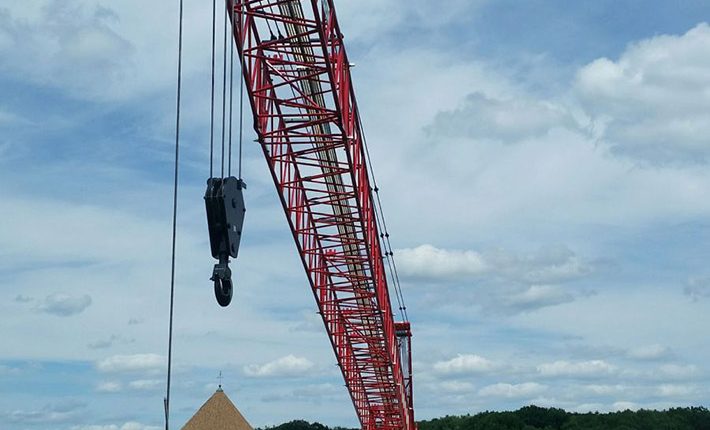 The manmade reservoir in the northwest corner of Pennsylvania that supplies water for the Shenango and Beaver Valleys also acts as flood control and is a popular recreational site. Originally completed in 1932, it is now a state historical landmark.  Original construction photos of the Pymatuning Dam show a contrast between the lifting equipment used then and the Manitowoc crawler crane Clearwater Construction is using today to restore the original gatehouse.

Gary Gorski, CEO of Clearwater Construction, Mercer, Pa., approached Gabe Lash of Harrisburg, Pa.-based Stephenson Equipment about acquiring the Manitowoc MLC165 for the Pymatuning job. Clearwater, a family-owned contractor, performs public-works projects over the entire state of Pennsylvania. Founded in 2003, the company has 175 employees, offers in-house design services, and is able to self-perform nearly 100% of any project from design to construction.

“Right now the crane is being used to help restore the gatehouse at the Pymatuning State Park,” said Gorski. “That project is going really well, and the MLC165 has been a big part of that. We love its capacity for both lift and reach, and it’s really easy to operate. Most importantly, the safety features put it over the top and make it an all-around quality machine. Plus Stephenson Equipment is really easy to work with.”

Gabe Lash, Stephenson area territory representative, said Clearwater has purchased several cranes from Stephenson over the years, including three 100-ton-capacity Manitowoc crawler cranes and a National 55-ton boom truck. “Right now they are renting the MLC165 from us with the option to purchase it. They haven’t decided if they are going to buy it yet.” Gorski added, “but we’re definitely leaning in that direction.”

The project at the reservoir includes the addition of water-control gates. The project will see the replacement of the original gates and the addition of several more to allow for downstream water temperature control. To dewater the area around the gatehouse Clearwater will be using the MLC165 to set a cellular cofferdam. Once the site is dewatered, the MLC165 will assist in replacing and adding the gates and restoring the gatehouse.

Continue Reading
391
Share LinkedinTwitterFacebookEmailWhatsApp
Subscribe to our newsletter
Sign up here to get the latest news, updates and special offers delivered directly to your inbox.
You can unsubscribe at any time
Leave a comment