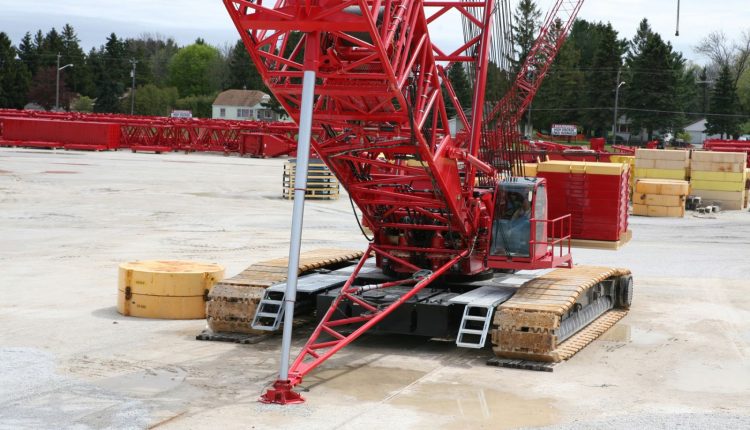 Manitowoc’s  latest innovation to help customers get the most out of their investment is a Boom Raise System (BRS) for the 440-ton Manitowoc 16000 Wind Attachment. The system is designed to raise longer wind attachment boom lengths that are needed to install nacelles on 328-foot wind turbine towers without the aid of an assist crane.

The BRS utilizes a large hydraulic cylinder housed in a special 10-foot boom insert section that attaches to the boom butt. The boom raising cylinder works in conjunction with the boom hoist by exerting an upward force on the boom. This is achieved by extending the cylinder downward onto prepared ground/matting. Once the boom angle is 38°, the boom hoist fully takes over.

Boom raising and lowering operations are accomplished with minimal operator action. Before booming up, the cylinder must be manually extended by a switch in the operator’s cab to contact the ground/matting. From this point, the operator simply controls the boom hoist handle while the crane’s operating system automatically controls the BRS. After reaching a boom angle of 38°, the cylinder must be manually retracted. The same steps are performed in reverse for boom lowering.

When Manitowoc originally introduced the wind attachment in 2010, it increased the capacity of the crane by nearly 50 percent at short radii. But Jerry Maloney, global product director at Manitowoc Cranes, points out that standard wind tower heights are rising from 262.5 to 328 feet, requiring crane users to obtain not only an increase in capacity, but an increase in reach as well. This means longer, heavier booms.

“Our goal in developing the BRS was to eliminate the need for investment in either a larger capacity crane or a second support crane to lift heavier booms on the job,” he said. “The BRS provides the extra boost needed to raise the boom until the standard boom hoist system fully takes over.”

Manitowoc has begun shipping this new option to Manitowoc 16000 crawler crane owners in North America and to export markets.

Continue Reading
471
Share LinkedinTwitterFacebookEmailWhatsApp
Subscribe to our newsletter
Sign up here to get the latest news, updates and special offers delivered directly to your inbox.
You can unsubscribe at any time
Leave a comment