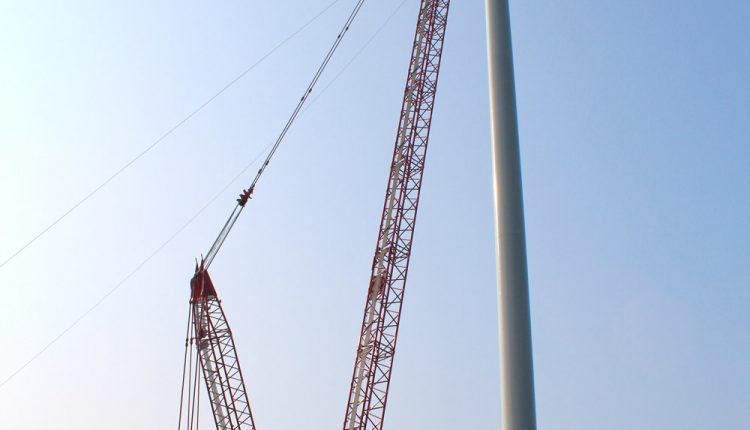 When Shinui Petra, one of South Korea’s largest construction equipment rental companies, was asked to supply a crane for a complex and compact assembly project for Young-gwang Yak-su Wind Power, there was only ever one choice—the MLC650 from Manitowoc, the new rising star of its fleet.

Choi Byung Eun, president and CEO of Shinui Petra, said the crane performed flawlessly on the job and its use resulted in significant cost savings for the overall project. By using the MLC650, the customer achieved savings through fewer workers on site, lower ground preparation costs, lower rental fees for assist cranes, plus lower transportation costs.

“Compared with alternative cranes capable of handling the work, the MLC650 delivered significant time and cost savings,” he said. “For a start, it’s smaller than the other options available, which means fewer trailers to transport the crane and less time to set it up. It took only 45 trailers to mobilize the MLC650 and three days to erect it, compared to five days and many more trailers for alternative options.”

Over 12 weeks the MLC650 worked at the new wind farm located in Young-gwang in Jeolla-namdo province on the southeastern coast of South Korea. It assembled six turbines and lifted components that weighed up to 140 t. The original plan was to lift the turbine nacelles in separate sections, one of which weighed 80 t and another at 60 t. However, the 650 t capacity of the MLC650 enabled the company to lift and install the nacelles as a single 120 t unit which was then lifted to a height of 120 m at a radius of 30 m. This delivered considerable cost and time savings for the company.

Choi said that when compared with other cranes, the MLC650 brought savings that were clearly quantifiable.

These savings were generated by the MLC650’s patented Variable Position Counterweight (VPC), which is an extending, suspended counterweight that allows the crane to achieve superior lifting ability without the need for a ground-mounted counterweight solution. The VPC design also means the counterweight does not have to be fully extended to the rear of the crane during set up, nor does it touch the ground, saving space on the job site.

Choi also explained that the need for less time to prepare the job site’s grounds was a real advantage.

“The job site is located in a landfilled area that was previously used as rice fields, so the terrain is very soft—extra attention was needed in the ground preparation” he explained. “In addition, the site was designed to work within the minimum possible space constraint, so it was impractical to use cranes with fixed counterweight trays extended to their rear. On top of this, access to the site was via a 4 m-wide farming lane, so we wanted to minimize the number of vehicles on the job site. The MLC650 and its easy erection proved the perfect choice for the site and enabled us to complete the job quickly and efficiently.”

The MLC650 has a standard 650 t maximum capacity that can be increased to 700 t with VPC-MAX attachment while a total of 203.8 m tip height can be attained by the crane when combining its 101 m luffing jib with its 104 m of main boom.

Thanks in part to the MLC650, the new Young-gwang Yank-su wind farm in South Korea is now up and running. The facility is generating 22,176 kW of energy a day and is expected to record a turnover of $4.9 million a year.

Continue Reading
542
Share LinkedinTwitterFacebookEmailWhatsApp
Subscribe to our newsletter
Sign up here to get the latest news, updates and special offers delivered directly to your inbox.
You can unsubscribe at any time
Leave a comment