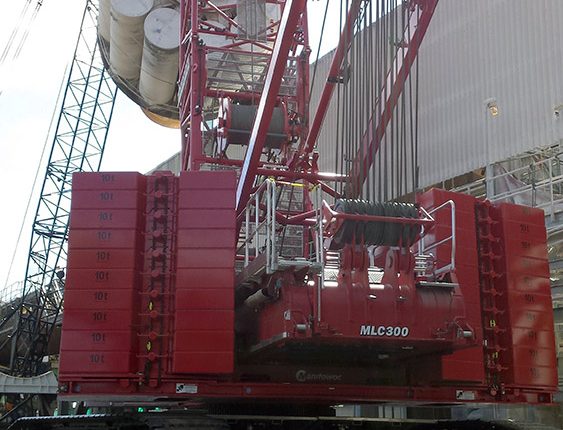 Manitowoc’s Variable Position Counterweight (VPC) can reduce the ground bearing pressure of cranes that are enabled with the technology – because the cranes need less counterweight for lifts, they weigh less overall, reducing pressure on the ground below, and in turn, the amount of ground preparation required.

This feature has proved especially useful for a project to replace an industrial lime kiln at a plant in Wilmington, North Carolina, USA. The plant was located near a river in a coastal region, so the job site’s terrain was soft and wet. The lift called for a crane that could fit into a tight space and lift the 215USt kiln, but could still handle the tricky terrain. A Manitowoc MLC300 proved to be a great solution.

W O Grubb Crane Rental, based in Richmond, Virginia, was given the job of carrying out the project’s lifting duties. Jeff Collins, vice president of engineering and administration for W O Grubb, said that he chose the 330USt MLC300 because of its capacity, small footprint and low ground bearing pressure.

“We had to erect the crane in an alleyway and only had an allowable ground bearing value of 2000psf to work with. Without the VPC, we couldn’t have made the crane light enough to safely complete the job,” he says. “Also, the MLC300 was a good choice for this job because it gave us the size and load capacity on a compact footprint.”

The crane’s primary job was to lift a 215USt lime kiln that measured 7.62m (25ft) in diameter. It needed to be lifted through a 10.8m by 22.86m (35ft by 75ft) opening in the roof of a 45ft-tall structure. The kiln was then placed on storage stands and hauled to a remote laydown area. The MLC300 then lowered a replacement kiln through the same opening so that an engineering team could weld the new unit into place.

“We were working in a very tight spot,” Collins says. “The crane had to be positioned within inches of a building wall at one end, with only a three-inch vertical clearance between the top of the counterweight stack and the bottom of a pipe rack under which the counterweights were forced to swing. It was a complex series of lifts, but even working in such tight quarters, the MLC300 performed flawlessly. We were able to finish the turnaround in 36 hours.”

Continue Reading
426
Share LinkedinTwitterFacebookEmailWhatsApp
Subscribe to our newsletter
Sign up here to get the latest news, updates and special offers delivered directly to your inbox.
You can unsubscribe at any time
Leave a comment