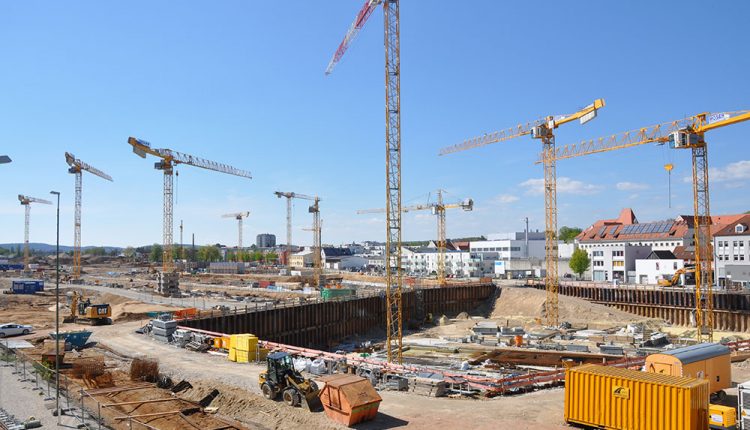 13 Potain tower cranes, including a Potain GTMR 386, six MDT 218s, one MDT 192, three MDT 178s, one MDT 162 and one MD 120 are working on the large-scale construction project.
The topless cranes were chosen for their ability to work close to one another, and for their simple and quick assembly.
A fleet of 13 Potain tower cranes is helping to build a new residential and commercial district in Regensburg, Germany. The new district, named “Das DÖRNBERG,” is only miles from Regenburg’s historic old town, which has been a UNESCO World Cultural Heritage since 2006.

Due to the job site’s tight quarters, the cranes are working extremely closely to each other. Plattling-based Moser Baumaschinen, the company handling the lifting work, chose the fleet of topless cranes to enable operators to swivel the cranes’ jibs over one another and lift in conjunction. Also, the company chose the cranes for their simple and quick assembly, which reduce setup time and therefore keep construction costs low.

Moser Baumaschinen provided the cranes to several contractors that are all handling lifting work on the project: Neumarkt-based Max Bögl; Wermelskirchen-based August Schmidt; and a consortium that consists of Regensburg-based Guggenberger Bau and Dietlikon, Switzerland-based Implenia Hochbau.

Mario Moser, one of the managing directors of Moser Baumaschinen, explained the choice in cranes:

“We have been a Potain partner for many years, and through our relationship with such an innovative crane manufacturer, we are able to supply large construction sites with our rental cranes. The Potain top-slewing cranes in particular are quick to assemble, powerful and have very little downtime,” he said. “It was our large range of topless cranes, including the MDT 218, that helped us win the Dörnberg contract. In the future, we are also planning to invest more in our top-slewing crane fleet.”

Moser Baumaschinen has been selling and leasing cranes and machines for the construction industry for more than 45 years. Its rental crane fleet is currently comprised of 375 Potain cranes, 75 of which are top-slewing cranes. With four locations in Southern Germany (Plattling, Maxhütte-Haidhof, Altenmarkt and Allershausen) Moser serves customers all over Bavaria.

Continue Reading
Manitowoc
491
Share LinkedinTwitterFacebookEmailWhatsApp
Subscribe to our newsletter
Sign up here to get the latest news, updates and special offers delivered directly to your inbox.
You can unsubscribe at any time
Leave a comment