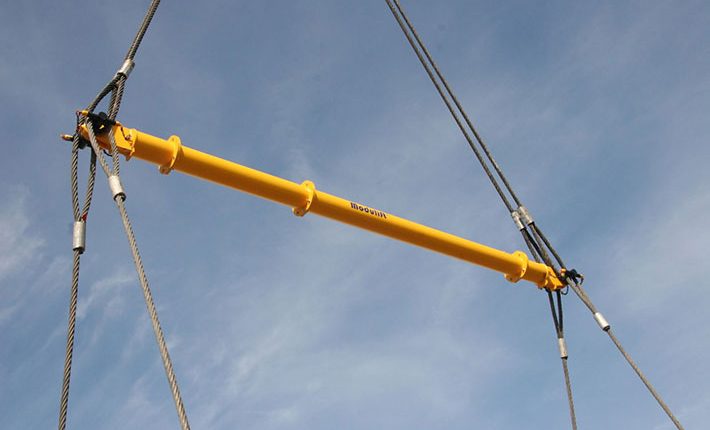 Modulift has introduced a trunnion spreader beam designed to offer lifting professionals an efficient, lightweight, and economic below-the-hook solution to ease the attachment of slings when rigging heavy lifts.

Cutting in half the duration of the rigging phase, the Modulift spreader has been modified and a drop link removed to make way for the trunnion pin and cross pins. This allows for direct connection of slings to the spreader beam.

The trunnion spreader will initially be launched in four sizes—MOD110, MOD250, MOD400 and MOD600—in a range of capacities from 110t to 1,000t. The shackle-less solution is a standard modular spreader, using the same struts and bolting configurations, and is fully compatible with current and legacy equipment.

Sarah Spivey, managing director, pointed to other features of the Trunnion Modular Spreader Beam, including improved safety, given there are no shackles and drop links to maneuver; time saved due to more efficient rigging; cost efficiency; and the Modulift hallmark of modular design.

The current range has been developed according to BS EN 1993-1. Further sizes can be designed on a custom basis and additions to the range may be manufactured in future if demand is sufficient, according to the company.

Continue Reading
398
Share LinkedinTwitterFacebookEmailWhatsApp
Subscribe to our newsletter
Sign up here to get the latest news, updates and special offers delivered directly to your inbox.
You can unsubscribe at any time
Leave a comment