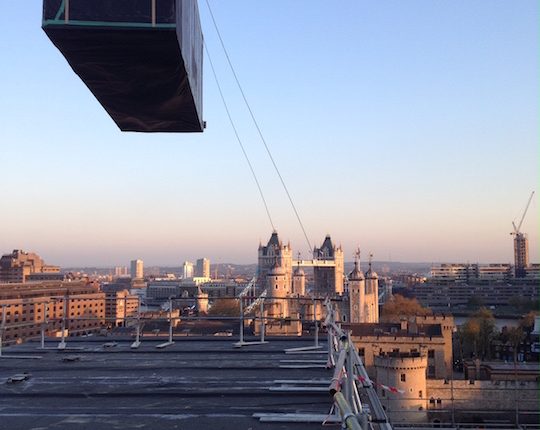 Two pioneers in modular concepts of different kinds combined to install bedrooms at the citizenM Tower of London Hotel, which offer guests views of the River Thames, Tower Bridge and a series of other famous landmarks.
Below-the-hook equipment manufacturer Modulift, a specialist provider of modular spreader beams, supplied rigging equipment as Polcom Modular installed 260 pre-fabricated structural modular bedrooms at the iconic riverside new-build.
Modular construction is fast becoming a building method of choice for organisations looking for rapid project completion, assured quality standards and minimal impact on the environment or the local area, said Ben Paget, structural director at Polcom. Polcom accepted a scope of work to design, manufacture, supply and install the bedrooms over an 11-week period, all at night.
The modules had bespoke designed lifting eyes integrated into the structural framing that were utilised by the rigging team. A bedroom-corridor module weighed approximately 8t, while the heavier bedroom-corridor-bedroom modules were around 12.5t.
Modulift provided standard MOD 24 (24t capacity at 5m / 17 ft.) and MOD 50 (50t capacity at 8m / 26 ft.) spreader beams, slings and shackles that were used in either single or one-over-two configuration depending on the lifting points on the modules; some were four-point lifts and others eight-point. Below-the-hook equipment totalled up to 1.25t in weight for each lift.
Polcom utilised a tower crane leased by Balfour Beatty, the major contractor, which was already onsite for other lifts related to the construction project. Paget explained that as the crane was sourced prior to completion of the module design, limited height was available for the top floor bedrooms.
He added: “We had to modify the top floor lift with shortened chains and tighter angles to accommodate the final lifts. The module centres of gravity positions were not quite central and we had to manually compensate some of them with sandbags. Modulift’s design service was critical to successful delivery of the project, giving us access to high quality drawings, specifications and expertise, particularly beneficial in offsetting the centre of gravity positions during design of the lifting frames.”
During the day, spreader beams and lifting equipment was stored in a purpose-built cage that slotted onto the top of a module, located by the lifting eyes. Polcom moved the cage up each time work started on a new floor level.
Prior to installation the modules were transported from Poland to London Thamesport, a container seaport on the River Medway, where they were placed in storage. Most could be moved under normal transport restrictions but the widest had to be accompanied by special escorts. The entire modular installation crew consisted of between six and 10 people, which included resource for site bolting of the modules as well as rigging and traffic marshalling.
Following the success of the project, Polcom has employed Modulift below-the-hook equipment and expertise on further installations in the UK, USA and Canada. Paget said six such projects are taking place at the time of publication.
He concluded: “Our modular system is designed bespoke to every project. Size and shape varies according to the architecture. Where possible we limit the overall width, length and height to standard transportation limits to avoid extra costs, but this is not always possible.”

Continue Reading
Below the HookLifting EquipmentModular Systems
531
Share LinkedinTwitterFacebookEmailWhatsApp
Subscribe to our newsletter
Sign up here to get the latest news, updates and special offers delivered directly to your inbox.
You can unsubscribe at any time
Leave a comment