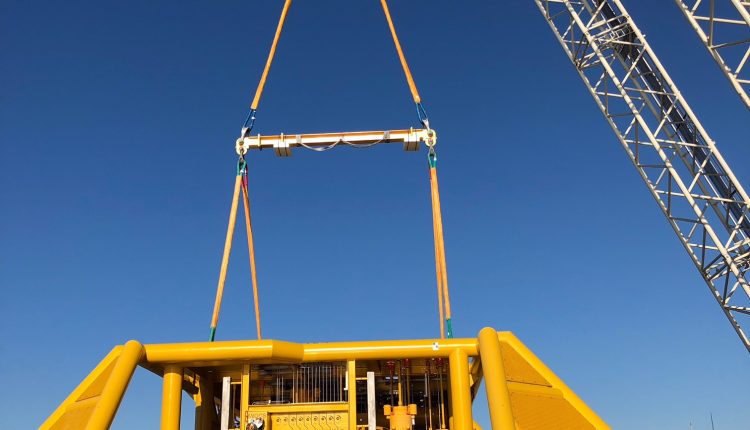 The standard Modulift SUB 380 beams originally offered up to 380t at 9m or 30 ft. and up to 16m or 52 ft. at a lower capacity. However, in this case, Modulift re-rated the capacity to 364t working load limit (WLL) with +1.5 dynamic amplification factor (DAF). The drop links were re-rated to 200t WLL, also with 1.5 DAF, and new data plates were added accordingly.

Chris Schwab, account executive at Modulift, explained that the identical spreaders’ original DAF was 1.8. He added: “The principle reason for refurbishing the beams was so they could be reused on another project that required an additional strut to achieve a new span, and they needed to be re-rated to a higher capacity, yet lower DAF.”

It was necessary to manufacture new 0.95m struts for each beam and shotblast all existing components. Extensive testing was conducted on welds, plus new spans and capacities. The drop links had already been tested to a sufficient capacity as part of an earlier project, thus, additional testing for these was not required.

Also included within the scope of work was the supply of new bolts and preparation of a calculations report so DNV could carry out verification against its Loadout, Transport and Installation of Subsea Objects criteria (DNV-OS-H206).

Unlike Modulift’s standard spreader beams that are manufactured using circular hollow sections, the subsea range has an open section design, suitable for water submersion by eliminating the risks of cavity or pressure issues. They are finished with a three-coat paint system that is based on a two-pack epoxy paint system suitable for the marine heavy lifting environment.

The physical size of the manifolds—fabricated in Ravenna, Italy—meant that they could only be brought offshore via a barge. Ground loading and crane capacity issues on site resulted in a requirement for a tandem crane lift. The installation vessel, however, had a single crane so to simulate the installation lift a single point lift was required. Schwab explained that the structures land on pre-installed guideposts and piles on the seabed so the structures require a very tight tolerance on installation level / trim.

To achieve a simulated offshore single point lift, Modulift provided a MOD250/400 spreader beam and associated rigging to ‘join’ the two site cranes together using an inverted spreader bar arrangement. The SUB 380 spreader bar on each structure was connected to the structure via high performance synthetic slings and ROV-friendly shackles to form the installation rigging arrangement on the structures.

Once subsea the Manifolds will act to combine power, communications, service fluids and production pipework from multiple gas wells into a single main pipeline / umbilical system.

Continue Reading
Below the HookModuliftOffshore Lifting
531
Share LinkedinTwitterFacebookEmailWhatsApp
Subscribe to our newsletter
Sign up here to get the latest news, updates and special offers delivered directly to your inbox.
You can unsubscribe at any time