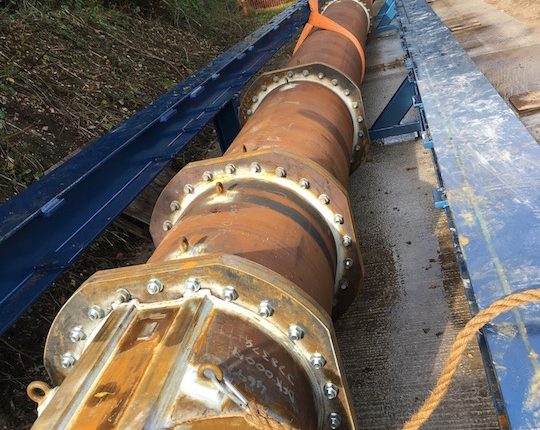 Modulift has manufactured its largest ever spreader beam that can lift a staggering 1,500t at a span of 20m. The feat of below-the-hook engineering was delivered to Holland-based Safe Lifting Europe B.V, a sister company of Euro Rope Nederland B.V. and an equipment / service provider to the marine industry, at the end of last year.
The MOD 800X/1500 has 1,000t / 800t, top / bottom wide body shackles at each end and is the second 1,000t+ spreader beam Modulift has manufactured in less than three months, as the super heavy lift sector continues to demand higher capacity equipment.
The latest beam received DNV Design Approval and DNV GL CG3 certification; the latter certifies that DNV carried out a full survey during the manufacturing and testing process, as well as approving the design. The beam took eight weeks to manufacture and test in a purpose-built compression test rig. The rig had to be upgraded so Modulift could apply a proof load of 1,650t (working load limit [WLL] x 1.1) to the spreader beam.
Sue Spencer, technical director at Modulift, said: “Despite the economic backdrop to marine and offshore markets, we are continuing to buck the trend and deliver landmark orders for customers who are looking for efficiency, flexibility and state-of-the-art engineering to support activities related to super heavy lifts.”
Spencer explained that this particular customer observes that marine influencers are increasingly looking for modular solutions to upscale lifting activities on topsides, in particular to avoid limitations associated with fixed systems. She also anticipates that the 800X/1500 beam will not be the company’s largest spreader for long, with the market showing an insatiable appetite to continue to upscale lifting capacities.
Sarah Spivey, managing director at Modulift, said: “Satisfying though it’s been to process these recent orders, we are not surprised. We have been aware of the potential at the super heavy end of the market for a long time—the middle remains quiet—and, like Sue, I don’t expect this to be our highest capacity beam for the long term. We have the engineering capability to go to 5,000t and the boundaries will continue to be pushed.”
Further testimony to the potential of the marketplace is the fact that the hulking beam was not acquired for one standout job, but for repeated use alongside other Modulift equipment, ranging from MOD 110 to MOD 600XB/800. Winches, spoolers, water bags, load cells, shackles and other rigging equipment are also widely utilised by its customer base.
Jacques Vroegop, technical director at Safe Lifting Europe, who took delivery of the 800X/1500 spreader beam, said: “We are working in a market that is showing unlimited potential in terms of capacity; we could be talking about much heavier lifts becoming commonplace. At the moment we are working with cranes offering up to 1,000t capacity but we are in a very dynamic sector.”

Picture: testing.jpg
Caption: The 800X/1500 was tested in a purpose-built compression test rig that had to be upgraded to apply a proof load of 1,650t (working load limit [WLL] x 1.1) to the spreader beam.

Continue Reading
Heavy LiftingModuliftSpreader Beams
543
Share LinkedinTwitterFacebookEmailWhatsApp
Subscribe to our newsletter
Sign up here to get the latest news, updates and special offers delivered directly to your inbox.
You can unsubscribe at any time
Leave a comment