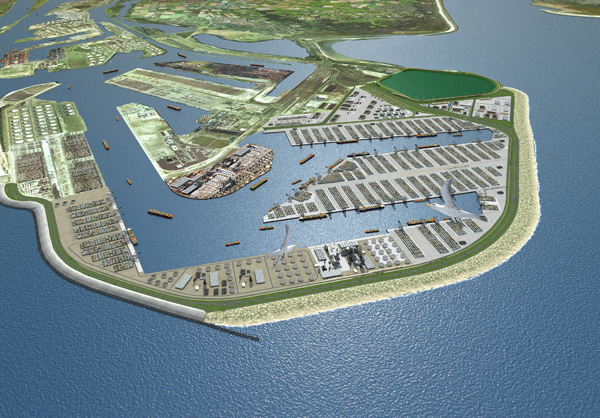 Never before, anywhere in the world, have nine Super Post Panamax container cranes been delivered at the same time in a port by the builders. Seven were built by ZPMC and two by Kalmar, all in China.

ZPMC divided its shipment over its own special transport vessels the Zhen Hua 14, which will start unloading 2 cranes for Rotterdam World Gateway (RWG) on Sunday, and the Zhen Hua 26, which will start unloading 5 cranes at the ECT Delta Terminal on the quayside of the Amazonehaven on Tuesday. The Cosco Da Kang started unloading 2 cranes at and for APM Terminal Maasvlakte on Sunday. Whereas ZPMC is delivering its cranes fully erect, Kalmar is supplying them in parts, which will be assembled at the terminal. RWG expects the following shipment of 14 cranes in total in February. During the first phase of the terminal, APMT will have 8 cranes at its disposal. ECT has a further 6 on order.

All of the cranes will be able to handle containers on vessels (yet to be built) where they can be stacked 25 wide. With the arm raised, the cranes are around 135 metres high, the height of a building with over 40 storeys.

Continue Reading
323
Share LinkedinTwitterFacebookEmailWhatsApp
Subscribe to our newsletter
Sign up here to get the latest news, updates and special offers delivered directly to your inbox.
You can unsubscribe at any time
Leave a comment