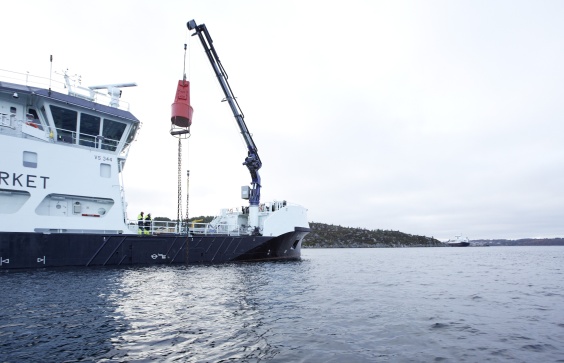 Unique STREICHER modular drilling rig will be installed in the Norwegian North Sea.
German company STREICHER will build modular drilling rig in line with all relevant offshore regulations, including NORSOK.
PALFINGER MARINE will deliver one knuckle boom crane and one pipe handling crane for this highly innovative project.

Archer, the global oilfield service provider, has secured a contract with Statoil for the permanent plugging and abandonment of 12 gas wells on the Heimdal field in the Norwegian North Sea. Archer has selected the German rig manufacturer MAX STREICHER GmbH & Co. KG aA for its VDD 400.2 -TOPAZ modular drilling rig to decommission and seal existing bore holes. The VDD 400.2 has been developed in accordance with the NORSOK Norwegian safety standards. The whole rig consists of modules that do not exceed 12 tonnes and is cost effective due to quick erection and dismantling of the rig using the drilling platform’s own cranes.

Knuckle boom and pipe handling crane meet highest demands for offshore applications
PALFINGER MARINE will support this innovative drilling solution with two offshore cranes: the PK 23500 M knuckle boom crane and the PKM 700 T pipe handling crane. Both cranes have been developed and finally designed according to the specific requirements and standards by the engineering departments of PALFINGER MARINE and STREICHER. The cranes are assembled in Maribor, Slovenia, and will be delivered by the first quarter of 2014. The PK 23500 M is equipped with an automatically levelled access basket for safest man-riding applications. The crane can also be used with a hook or winch. For safety reasons, various movement sequences of the PKM 700 T will partially be automated, and an anti-collision system from STREICHER is integrated.
The PKM 700 T will have higher capacity compared to the existing crane on STREICHER’s VDD 400.1 offshore rig, which is being used by Archer off the coast of New Zealand on Shell’s Maui A platform, besides having a radius of 21 metres. Both cranes meet the highest demands, including ATEX regulations and all offshore standards. “We are very proud to be a part of this innovative and seminal project. This will bring our offshore business to the next level and will help us gain even more ground in the oil and gas sector.
Participating in such projects shows PALFINGER MARINE’s leadership in innovation and highest quality demands for our cranes,” says Karl Oberreiter, Head of PALFINGER MARINE.

Continue Reading
349
Share LinkedinTwitterFacebookEmailWhatsApp
Subscribe to our newsletter
Sign up here to get the latest news, updates and special offers delivered directly to your inbox.
You can unsubscribe at any time
Leave a comment