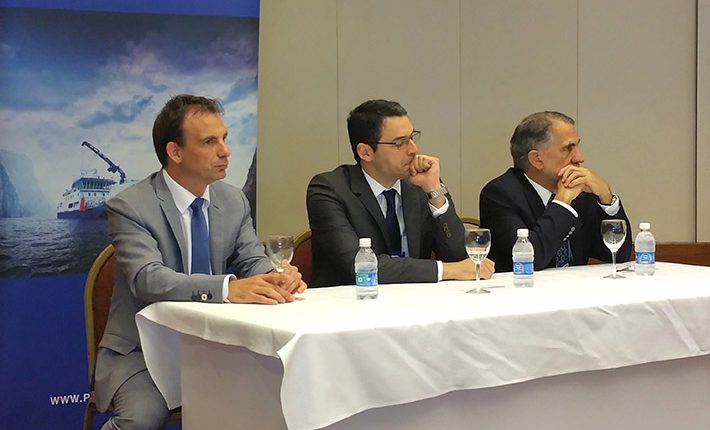 Bringing together the most representative companies and institutions in the Latin American oil & gas industry, Austrian based PALFINGER MARINE held the seminar “Efficiency through Innovation and new Technologies” in Pestana Hotel, Copacabana, 10 August. The event was to celebrate the delivery of the first batch of altogether 28 offshore cranes built in Brazil for seven drilling rigs ordered by the Jurong Shipyard in Espírito Santo. The contract has a total value of 100 million USD.

Hosted by PALFINGER MARINEs Managing Director Karl Oberreiter and Latin America Area Manager Suzana Barros, the conference featured prominent speakers in the offshore market, such as Mauro Andrade, Vice President of Public Relations at Statoil Brazil and Nicolas Poirier, Director Vessels at Subsea 7. Luiz Fernando Seixas de Oliveira, Vice President of DNV GL has been part of the speaker panel as well as consular authorities of the investor countries in the oil & gas sector: General Consul of Norway, Helle Klem, and the representative of the Austrian consulate, Christoph Robertson.

The lectures addressed the importance of developing innovations and new technology as a competitive advantage and to bring efficiency to different stages of offshore productions. According to Nicolas Poirier “innovation is the required factor to survive in the market, we increase efficiency through innovation.” Oliveira stated that “innovation is something new that has undergone an improvement compared to what it was before. This creates efficiency and growth”. Mauro Andrade on the other hand pointed out in his presentation several new technologies implemented to exploit the Peregrino field – one of the main Statoil exploration areas in Brazil.

Trust in the market – PALFINGER MARINEs strong commitment to Brazil
Despite the occasion of the meeting, the challenging market conditions were one of the points discussed during the seminar. According to PALFINGER MARINEs Managing Director Karl Oberreiter “we have not yet finished investing, some people claim that we are crazy to invest in Brazil at the moment, but we believe that the market will manage to overcome. Only the strongest players will survive and we have a strong commitment to Brazil. We want to reach the top of the maritime industry”.
The difficulty in getting steady at the Brazilian market was highlighted by Suzana Barros during the seminar. According to her, patience, perseverance, knowledge of local laws and regulations and a large network are necessary to succeed in the Brazilian market.
The event ended with a get-together including cocktails and an invitation to visit the exhibition Marintec South America (Navalshore), where PALFINGER MARINE was showing a booth promoting its entire product range and services. Especially the winches and offshore equipment from NDM gained interest, the company was recently acquired by the Palfinger Group.

Continue Reading
408
Share LinkedinTwitterFacebookEmailWhatsApp
Subscribe to our newsletter
Sign up here to get the latest news, updates and special offers delivered directly to your inbox.
You can unsubscribe at any time
Leave a comment