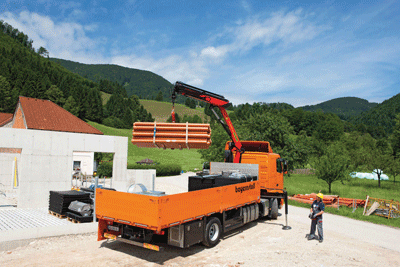 Palfinger will present its new brand livery at the IAA Commercial Vehicles exhibition in Hanover, Germany, taking place 20 to 27 September.

The Austria-based loader crane and access platform giant said it “is committed to implementing the concept of a consistent umbrella brand throughout the world to strengthen and standardize the Palfinger brand.”

It is, therefore, dropping all its sub-brands with the exception of Epsilon, the truck-mounted timber and recycling crane segment. In future, truck-mounted cranes, container handling systems, transportable forklifts, access platforms and tail lifts will be marketed exclusively under the Palfinger label.

The manufacturer will also be officially launching five new cranes from the High Performance range. Among those making their world debuts will include three new SH truck-mounted cranes. The PK 10002 SH, the PK 12502 SH and the PK 110002 SH High Performance will round off the product range at both ends.

In another world first, said the company, all cranes in the SH range can now be supplied as EN280 workman basket cranes. Palfinger’s HPSC stability system, which enables fully variable positioning of the stabilizers even while operating the basket, is a particularly notable feature in this case, it said.

Continue Reading
560
Share LinkedinTwitterFacebookEmailWhatsApp
Subscribe to our newsletter
Sign up here to get the latest news, updates and special offers delivered directly to your inbox.
You can unsubscribe at any time
Leave a comment