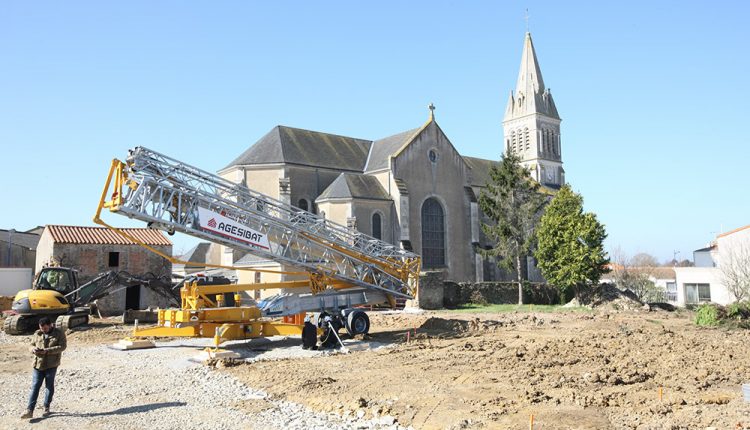 The first Potain Hup 40-30 in France has been put to work on a residential housing project.
AGESIBAT chose the crane for its versatility and compact footprint.

AGESIBAT has taken delivery of the first Potain Hup 40-30 self-erecting crane to arrive in France and has quickly put the crane to work, commissioning it for a housing project in Vendée. The crane is helping to build 11 houses, performing all of the project’s lifts from a single location. Its high-performance slewing radius and 40 m jib is able to cover the entire job site, saving the company from having to set up the crane in a different place for each set of lifts.

The versatility shown on this project by the Hup 40-30 is one of the primary reasons AGESIBAT chose the next-generation, self-erecting tower crane over other lifting solutions. The masonry contractor chose the crane for its compact footprint and versatile configuration options, explained Yannis Rousseau, owner of the company.

“The Potain Hup 40-30 works well in both a city and forest environment, thanks to its telescoping abilities that help to lift over obstacles,” he said. “We considered acquiring a Potain Igo 50, but when we found out about the Hup 40-30, and that such a small amount of space is needed on the ground for its height and lifting capacities, we felt confident that the Hup 40-30 would be a great long-term investment.”

AGESIBAT erected the crane in Saint-Mathurin, a small village in northwest France, in March 2017. It’s expected to remain on the job site for four months, which is the first phase of the housing project’s construction. The crane is lifting construction materials in loads that weigh up to 2.5 t, at radii up to 40 m. It was erected at 30 m in height for the project.

The 4 t Hup 40-30 shines in both versatility and agility, with several configuration options, high-performance slewing that delivers superior motion control, and the best transport package ever designed for a self-erecting crane. It can be erected in 16 different configurations, which is unique to this category of self-erecting cranes, enabling it to be easily adapted for a range of job site applications. Additional versatility is delivered with the crane’s raised jib that offers three positions: horizontal, 10° and 20°.

AGESIBAT has been in business in France for 40 years and has grown to 23 employees. The company currently owns two Potain self-erecting cranes, both of which are an Igo 22 model. It acquired the new Hup 40-30 through Potain distributor SOME, based in Saint Herblain, Angers, Chollet, La Roche sur Yon.

Continue Reading
Manitowoc
564
Share LinkedinTwitterFacebookEmailWhatsApp
Subscribe to our newsletter
Sign up here to get the latest news, updates and special offers delivered directly to your inbox.
You can unsubscribe at any time
Leave a comment