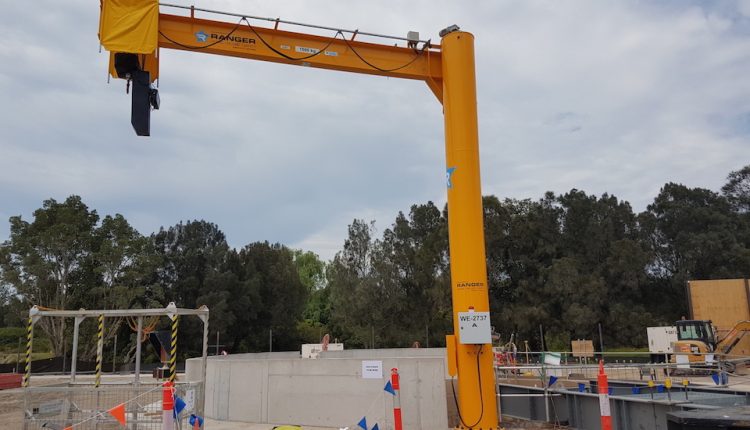 New South Wales, Australia-based Ranger has installed five (with the potential to become seven) 1.5t working load limit (WLL) jib cranes for a major highways infrastructure project that will construct a predominantly underground motorway system to the west of Sydney.
The WestConnex tunnels will link the M2, M4 and M5 motorways up with other new tunnel systems, providing crucial support for Sydney’s long-term economic and population growth. Most of the new WestConnex highways will be in underground motorway tunnels to minimise the need for land acquisitions and remove through-traffic from local streets.
The original jib crane specifications covered their use for both man riding / evacuation and general lifting. However, upon discussion with lifting, rigging and safety specialist supplier Ranger, a decision was taken to restrict their use for man riding / evacuation only. The cranes feature 6.5m underslung height with 6m reach and offer heights of lift ranging from 26m to 70m.
Ashley Thacker, general manager at Ranger, said: “WestConnex needed a second point of evacuation from each of their shafts in the case of an emergency where workers needed to be stretchered out. The shafts range from 26m to 70m deep, hence the varying heights of lift. If the cranes were also used for goods lifting there was potential for rescue operations to be delayed, which is why it was suggested in consultation to limit their use.”
All jib cranes will be commissioned by the end of March and will remain onsite until project completion, scheduled for 2020. Regardless of what will be limited or zero duty, the cranes will be checked for full operation daily as a part of the site’s pre-start requirements.
Ranger chose 3t electric chain hoists from Swiss manufacturer GIS that were downgraded to 1.5t capacity to facilitate man-riding. All were fitting with overload protection, a load cell with read out, pendant and remote controls.
Thacker said: “Given the high profile nature of the site we only sourced from the best manufacturers in each component area. Even then, the hoists needed to be enhanced to comply with Australian standards for man-riding. We only worked with suppliers who not only excel in manufacturing, but support that with professional paperwork, top quality engineering drawings and flexibility to work within the most stringent project-specific requirements.”
Thacker explained that lifting the columns from horizontal to vertical presented challenges as there were no dedicated lifting points, while working near open shafts came with inherent safety issues that needed to be addressed during the planning stages. Further, he said, the environment was also challenging in that the temperature reached 37 degrees Celsius during installation of one of the cranes.
Upon successful installation, Ranger conducted load testing with water bags and completed training sessions with WestConnex personnel. It is also committed to providing monthly inspection and maintenance for the duration of the project.

Continue Reading
#cranesChain HoistsJib Cranes
614
Share LinkedinTwitterFacebookEmailWhatsApp
Subscribe to our newsletter
Sign up here to get the latest news, updates and special offers delivered directly to your inbox.
You can unsubscribe at any time
Leave a comment