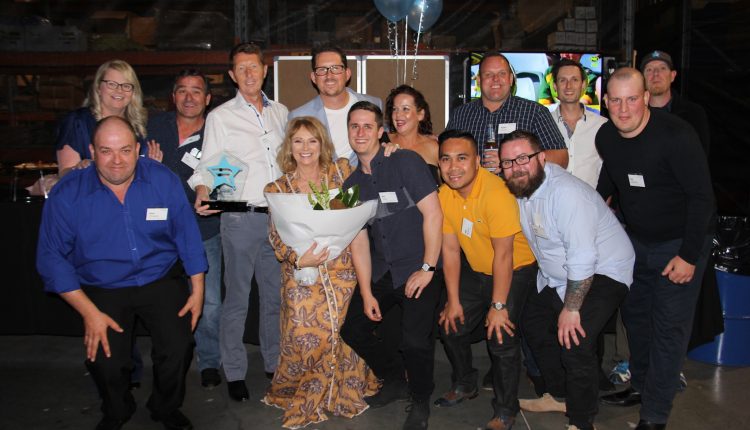 New South Wales, Australia-based Ranger Lifting welcomed a bumper crowd to its facility in Prestons, near Sydney on Saturday 22 September 2018 to celebrate 20 years in business. Nearly 100 guests participated as the site was transformed for a night of festivities.

The occasion doubled-up as a grand opening of the company’s new headquarters, 40km southwest of Sydney’s central business district. The facility, three times the size of the previous site, was converted for the evening, with a live band, catering, photo booth, fleet of wrapped vehicles, and decorations creating the backdrop to a memorable occasion.

Family-owned Ranger was represented by Steve Thacker, managing director, who was among the company’s founders in 1998; his wife, Verity Thacker, quality assurance manager; and son Ashley Thacker, general manager, who recently completed 16 years at the firm. Steve was presented with a commemorative glass plaque and joined the leadership team in welcoming guests, many of who have been with Ranger from the start.

Ashley, who delivered a rousing speech to attendees, said: “It was humbling that such a great number of people travelled—many from afar—on a Saturday evening to mark the occasion with us. As guests mingled on a shop floor that is usually abuzz with the day-to-day activities of a lifting and rigging equipment supplier, stories were shared about the important role so many have played in taking the business to its latest landmark. Reminiscing continued well into the night!”

Steve responded: “As I said in the build-up to the event, relationships have been integral to the success of our business. What better way to celebrate that than to bring our community together in a relaxed environment to reflect and, more importantly, look forward to what the future might bring from our new, enhanced HQ facility?”

Also marking the occasion were Stuart Ericson, operations manager, who has been with the company 11 years; Kristie O’Connor, customer service manager, who joined eight years ago; and her husband, Dave, who she introduced to the company. Leo Giuntini, sales manager of five years, was among others in a nearly 20-strong Ranger contingent on the night.

As Steve concluded: “To have a successful company you need great people with you on the journey.” Kristie echoed that sentiment when she presented Verity with a bunch of flowers to conclude a short but heartfelt presentation ceremony. The team then posed for photos.

Also onsite was the resplendent Ranger-sponsored Ford Falcon GTHO, currently being raced by Aaron McGill, of McGill Motorsport, in the Touring Car Masters series. Guests were given the opportunity to sit in the vehicle, prominently branded in Ranger logo and colours, before McGill and the team travelled to the Mount Panorama Circuit to prepare for the 1,000-km Bathurst 1000 on 4-7 October.

Continue Reading
Ashley ThackerBelow the HookLifting Equipment
295
Share LinkedinTwitterFacebookEmailWhatsApp
Subscribe to our newsletter
Sign up here to get the latest news, updates and special offers delivered directly to your inbox.
You can unsubscribe at any time