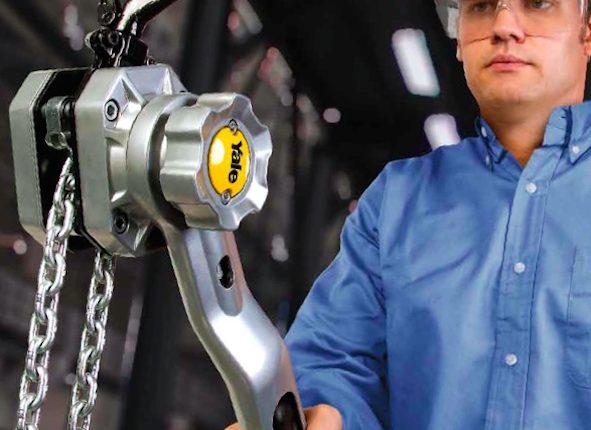 New South Wales, Australia-based Ranger has taken delivery of its first batch of Yale Ergo 360 ratchet lever hoists, suited to pulling, securing and lifting, featuring manufacturer Columbus McKinnon’s patent-pending crank handle.
Ranger, a specialist supplier of lifting and rigging equipment, is among the first companies globally, and the only one in Australia, to stock the innovative product, with the 750kg and 1.5t units shipped to Sydney among the first off the production line.
The Ergo 360 is the result of extensive research and ergonomic studies conducted by Columbus McKinnon’s engineers and application specialists, in addition to representatives of the Institute for Product Innovation at the University of Wuppertal, Germany. The study revealed that lever hoists are more often used for pulling and securing than they are for lifting. Further, in many applications, proper, safe and ergonomic use has not previously been possible. The findings formed the cornerstone of subsequent product development and testing.
Ashley Thacker, general manager at Ranger, said: “I first became aware of the Ergo concept at the CeMAT trade show, which took place in Germany last year. What interested me was that within the results of this extensive research programme were synergies with feedback we received from our own marketplace. The product represented a tailored solution from one of the most respected manufacturers in the industry.”
He added: “I have eagerly awaited the product’s availability and have been impressed how Columbus McKinnon have used the data gathered to build a world-class solution that addresses industry’s ergonomic and performance expectations. I’m excited about sharing the ratchet lever hoist with existing and prospective customers.”
A key feature of the product is its revolutionary crank handle, which is designed for optimal efficiency and safety, allowing for operation in both lifting and pulling applications. The manufacturer said the design allows an operator to work up to 12 times faster and with as much as 30% less pull force than with conventional ratchet lever hoists.
Other standout features include positive load control, with a Weston-type brake that stays clean and dry for precise load positioning; lightweight aluminium housing; corrosion protection; swivel hooks that are easy to inspect and forged, allowing them to yield under overload without breaking; and easy identification through unique serial numbers.
Thacker said: “Our customers will also recognise that the design keeps the operator’s body aligned with the load chain, reducing the risks associated with twisting the hoist around the chain. The grooved, no-slip handle is also provided with the operator in mind, as is the distinctive clicking sound that one hears when the handle is locked into position.”
Ranger has already started promoting the Yale Ergo 360 ratchet lever hoists to customers in the mining, tunnels and rail industries, but anticipates interest from a wide variety of sectors that currently employ level blocks and other alternative solutions.

Continue Reading
AustraliaCMCOColumbus McKinnon
629
Share LinkedinTwitterFacebookEmailWhatsApp
Subscribe to our newsletter
Sign up here to get the latest news, updates and special offers delivered directly to your inbox.
You can unsubscribe at any time
Leave a comment