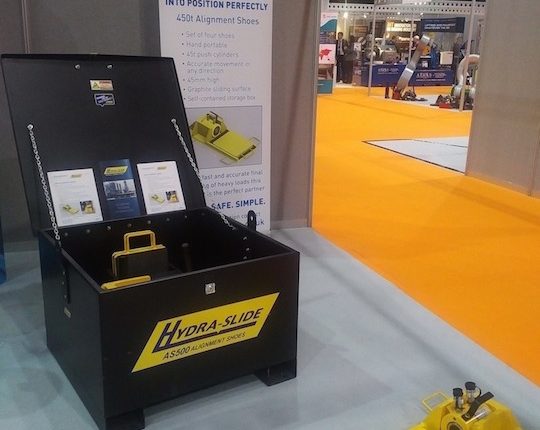 Rapid Response Solutions (RRS) will take a bi-focal approach to its trade show strategy this year, taking exhibition space at a major infrastructure event and across the vertical portfolio of the Lifting Equipment Engineers Association (LEEA).
RRS has booked Stand 120 at the Infrastructure Show, which takes place at London Olympia on 20 April; and will again co-exhibit with Canadian hydraulic skidding system manufacturer Hydra-Slide at LEEA’s annual LiftEx event, which this year is staged at the International Centre, Telford on 29-30 November.
The inaugural Infrastructure Show is underscored with the tagline ‘Constructing the Future’ and connects supply chains in a multi-billion pound sector, whilst offering insight and engagement to those involved in—or aspiring to join—major projects. It is supported by ongoing and future projects overseen by HS2, Thames Tideway Tunnel and Transport for London.
Stuart Trinder, sales and distribution manager at RRS, said: “We are a multifaceted company that offers a variety of lifting and moving solutions that we can tailor for the mega projects sector. Whether it be our 300t hydraulic skidding system, fleet of mini-cranes, or contract lifting expertise, we have solutions and manpower to meet the stringent requirements of these demanding jobsites.”
Later in the year, RRS will return to LiftEx following a successful collaboration with Hydra-Slide—RRS is its only international sales partner—in Aberdeen last year. However, where the AS500 alignment shoes, used for final positioning of loads, were the focal point of that exhibit, a range of turntables and climbing jacks will be presented to the Telford audience.
Hydra-Slide turntables are suited to rotating any heavy or oversized load accurately and efficiently, even in areas of restricted access or clearance. Climbing jacks, meanwhile, are operated with Ekki jacking timbers. As the jacks are extended and retracted, the timbers are progressively built under the jack for a fast and safe means of raising or lowering large loads.
Trinder said: “LiftEx focussed more on quality than quantity of visitor which suited our consultative approach and allowed us to generate a number of promising leads in addition to bringing us into contact with many of the UK’s major super projects. Therein lies an interesting synergy with prospects at the Infrastructure Show. With the show moving to a more central location, we are hopeful that those positive elements remain consistent and if the aisles are busier that will only enrich the experience from an outreach perspective.”
RRS is also considering taking a tabletop at each of LEEA’s 2017 roadshows that bring seminars, a small exhibition and networking under the ‘Lifting the Load—Out on the Road’ catchline. LEEA has announced roadshows on 27 June, at the Ramada Plaza, Belfast; and two days later at the Red Cow Moran, Dublin.
Trinder said: “We are considering our options but it is likely that we will make intentions known to the association that we will attend in the coming weeks. A hallmark of LEEA events is the high level of participant and the educational backdrop to the roadshow format is something that we’re keen to align our product range with.”

Continue Reading
Alignment ShoesHeavy LiftingInfrastructure
654
Share LinkedinTwitterFacebookEmailWhatsApp
Subscribe to our newsletter
Sign up here to get the latest news, updates and special offers delivered directly to your inbox.
You can unsubscribe at any time
Leave a comment