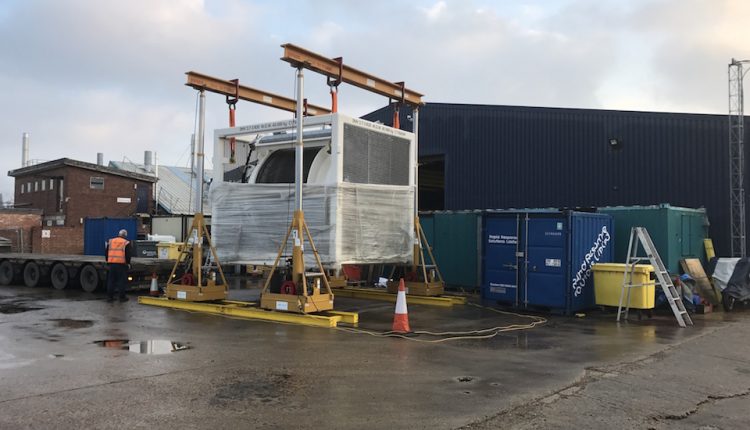 Lifting, storage and transport specialist Rapid Response Solutions (RRS) utilised all facets of its business to transship a 40t winch for remotely operated vehicle manufacturer Saab Seaeye. Integral to the job was its 60t capacity hydraulic gantry system.
RRS accepted a scope of work to take delivery of the winch and related ancillary equipment from two lorries that had travelled from abroad, upon their arrival to the UK. The equipment needed to be stored at its Portsmouth facility for two weeks prior to delivery to a Southampton port where it was loaded onto a vessel for shipment to an undisclosed location.
Paul Barber, managing director at RRS, explained that the Mega Lift gantry system, which it purchased two years ago from Claxton International, was selected due to timing issues dictated by the customer.
He said: “The incoming haulier was unsure when the load would arrive, yet it had to be unloaded immediately once it did. It wasn’t practical to have a mobile crane waiting around the yard but we could rig the Mega Lift in advance knowing the incoming truck could reverse under the beams and we could sling the load quickly.”
The Mega Lift was setup with four legs (towers) and two overhead beams (girders). The system lifts by extraction of the legs, different to conventional gantries that use a lifting device such as a winch or a strand jack. The complete gantry system and load was then slid on tracks. Barber explained that conventional gantries aren’t available for weights up to 40t.
He added: “It takes an hour or so to set up the Mega Lift but once rigged the lift took just minutes. It was operated by four individual controllers but, as they can be used in tandem, only two operators were required. The Mega Lift has integral hydraulic packs, powered by a 110v transformer system.”
The winch, which measured 4.5m by 3.5m by 3.5m, was unloaded and moved to an outdoor storage position, while an 18t Valla mini-crane from the RRS fleet was mobilised to unload the other equipment, including several smaller winches and cable drums that Saab Seaeye requested were placed in indoor storage. RRS offers a number of short- and long-term storage options with 24-hour CCTV surveillance, regular after dark security patrols and electric gates, complete with intercom.
Barber concluded: “We purchased the Mega Lift in February 2015 and, at the time, we didn’t have any contracts for it, but since then we have found lots of uses for the equipment. It was almost in full-time use over a period of months at maritime manufacturer Magma Structures, for example, lifting and lowering yacht masts in paint tents. Owing to its compactness and versatility it has proved popular in a myriad of other applications since.”

Continue Reading
#cranesGantry CraneHeavy Lifting
903
Share LinkedinTwitterFacebookEmailWhatsApp
Subscribe to our newsletter
Sign up here to get the latest news, updates and special offers delivered directly to your inbox.
You can unsubscribe at any time
Leave a comment