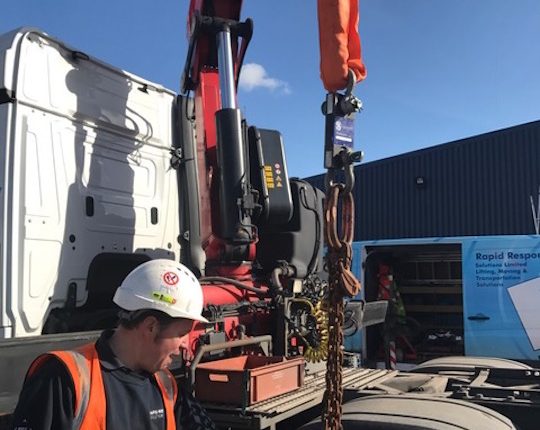 Rapid Response Solutions (RRS) once again demonstrated the reliability and durability of Straightpoint’s range of force measurement, load monitoring and suspended load cell equipment whilst weighing components of its new 200t capacity Mega Lift.
RRS recently took delivery of its second Mega Lift—it already had a smaller 60t capacity system—and had a requirement to weigh all four rams, two beams and the trackway. The systems lift by extraction of the legs, different to conventional gantries that use a lifting device such as a winch or a strand jack. The complete gantry system and load can be slid on tracks.
Stuart Trinder, sales and distribution manager at RRS, said: “It was important to calculate and document the weight of each item so we known how much load to put on the vehicles when delivering to site. The information is also included in the product’s method statement as some areas where customers wish to set up the equipment have a maximum load limit. The heaviest items were the 2.5t rams so one can imagine the importance of understanding the weight of each component.”
The application showcased RRS’s ability to utilise its existing inventory, including the 5t capacity Radiolink plus wireless load cells that are in each of the company’s rigging vehicles; the 34t capacity truck-mounted Fassi F365A crane; and other below-the-hook equipment.
David Ayling, director at Straightpoint, said: “Rapid’s application resonated with me because it showcased the reliability and longevity of equipment that has been in the field for many years. We frequently communicate to industry about our new and innovative products but perhaps we could more readily champion the volume of kit that has been in service for many years even in the most demanding of industries.”
Trinder said: “The load cells were integral to the operation. We have 10 rigger vans of varying sizes and most carry on board a Radiolink plus. Using equipment at the Portsmouth depot we were able to weigh all the required components within a few hours using our own crane operator, a lift supervisor and a rigger.”
He continued: “Straightpoint’s kit is bullet proof. Their load cells are the best available in the market and they never let the rigging teams down. They often encounter a requirement to check weights in the field as the information provided or stamped on the equipment can prove to be inaccurate.”
Trinder added that the load cells and Mega Lift will again combine onsite whenever there is a need to calculate the accurate weight of a load. “I would estimate that one in three Mega Lift projects require the use of Straightpoint’s equipment,” he said.
For weighing the Mega Lift’s components, the team also utilised RRS’s new Kinetic Enterprise system from Motion Software to document the information, sourced to control inspection compliance processes. In the field, RRS can use the software to manage multiple inspections and issue reports in addition to tailoring LEEA and LOLER-compliant documents and forms. The software is built to create compliant certificates for cranes, forklifts and other equipment.
“The new Mega Lift will give us extra lifting capacity in areas where headroom is limited,” said Trinder. “We anticipate constant utilisation of both units on our own projects or out on hire. Maritime, shipbuilding and power plant professionals are among those who have noted our expanded fleet and are already making enquiries. It was important to quickly document the weight of the new Mega Lift’s components upon arrival at our depot so we are ready to advance these enquiries.”

Continue Reading
Fassi CranesLift PlanningLoad Cells
648
Share LinkedinTwitterFacebookEmailWhatsApp
Subscribe to our newsletter
Sign up here to get the latest news, updates and special offers delivered directly to your inbox.
You can unsubscribe at any time
Leave a comment