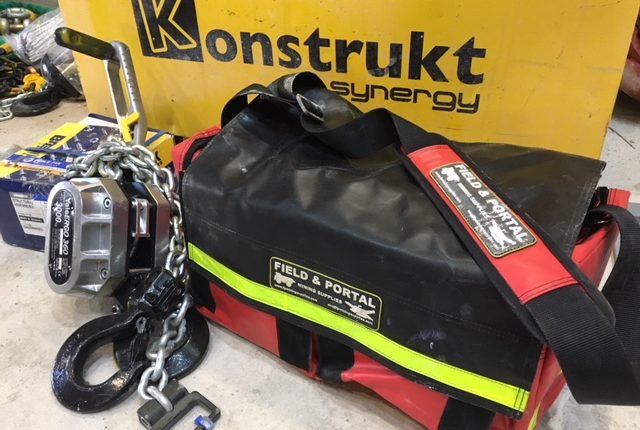 The product was introduced by Ranger Lifting, a specialist supplier of lifting and rigging equipment, which stocks the 800kg, 1.6t, 3.2t, and 3.4t capacity hoists at its new Prestons facility near Sydney—and is looking at bringing in the 9t unit that has only been released this month by CM. A key feature is its revolutionary crank handle, which is designed for optimal efficiency and safety, allowing for operation in both lifting and pulling applications. The manufacturer said the design allows an operator to work up to 12 times faster and with as much as 30% less pull force than with conventional ratchet lever hoists.

Marc Fielding, director at Field & Portal Mining Supplies, which supplies products to the underground mining, tunnelling, and coal industries, said: “The handle enables the user to get into a position that feels much safer; it’s more like a rowing action. You can grasp the crank handle with a good, secure grip without it slipping from your fingers. This also prevents your hand hitting against components when ratcheting the handle. The [Yale Ergo 360 ratchet lever] hoist will be the only product of its type we’ll consider using in future.”

The design keeps the operator’s body aligned with the load chain, reducing the risks associated with twisting the hoist around the chain. The grooved, no-slip handle is also provided with the operator in mind, as is the distinctive clicking sound that one hears when the handle is locked into position. Other standout features include positive load control, with a Weston-type brake that stays clean and dry for precise load positioning; lightweight aluminium housing; corrosion protection; swivel hooks that are easy to inspect and forged, allowing them to yield under overload without breaking; and easy identification through unique serial numbers.

Fielding has been using four units on his project for a variety of tasks, from levering components into place when building machines to holding chains when shortening them. He said: “We’ve found the product to pull straight and perform securely. Hopefully we will see them used on all mining and tunnelling infrastructure jobs in future.”

And continued: “After myself and the mechanical team used it, I wouldn’t purchase another brand again; it’s strong, safe to use, and a solid, bulletproof hoist. I have already introduced the product to another site and encouraged them to arrange a visit [by Ranger]. Working with them has made the process of sourcing quality equipment a lot easier, owing to their product knowledge and support.”

The Ergo 360 is the result of extensive research and ergonomic studies conducted by Columbus McKinnon’s engineers. The study revealed that lever hoists are more often used for pulling and securing than they are for lifting. Further, in many applications, proper, safe and ergonomic use has not previously been possible. The findings formed the cornerstone of subsequent product development and testing.

Ashley Thacker, general manager at Ranger, said: “I’m delighted Marc and his team have reported back with such positivity. What initially interested me about the product was that within the results of the manufacturer’s extensive research programme were synergies with feedback we received from our own marketplace. However, you don’t really know how it will perform until it is tested in a real-life application.”

Continue Reading
Columbus McKinnonField & Portal Mining SuppliesLifting Equipment
594
Share LinkedinTwitterFacebookEmailWhatsApp
Subscribe to our newsletter
Sign up here to get the latest news, updates and special offers delivered directly to your inbox.
You can unsubscribe at any time