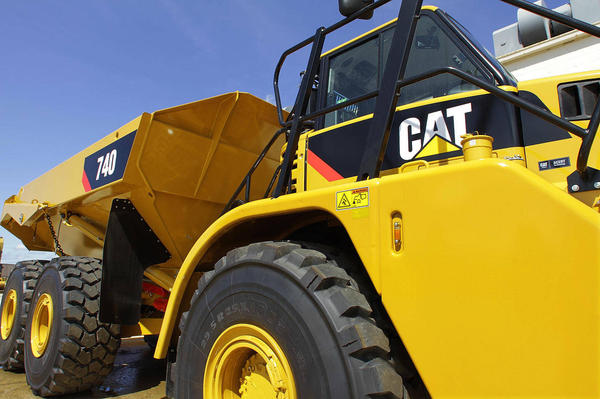 Total revenues for the full year were up 41 percent on last year at $60.1 billion, of this construction equipment- of which telehandlers are a very small part – was $19.67 billion, an increase of 45 percent on 2010. Pre-tax profits jumped almost 80 percent to $6.725 billion. Profits were up in all of the company’s sectors, but grew most rapidly for Construction equipment with operating profits jumping 163 percent.

The momentum carried into the fourth quarter with total revenues up 35 percent to $17.2 billion, of which construction equipment was $5.4 billion – up 31 percent, in this sector Europe, Africa and the Middle East region was the fastest growing, rising 35 percent to $1.22 billion, followed by North America at 31 percent. South America and Asia grew by 29 and 28 percent respectively.

Caterpillar is bullish about 2012 for all sectors, including Europe which it expects to pick up in the second half, after a flat first two quarters. Overall it is anticipating revenues for the year in the region of $68 to $72 billion, an increase of 15 to 22 percent. The company’s backlog at the end of the year was a record $29.8 billion.

Chief executive Doug Oberhelman said: “Our strategy is squarely focused on customers, and in 2011 our employees, suppliers and dealers delivered. We improved product quality, invested significantly in manufacturing capacity and product development, and improved our market position. We completed two large acquisitions, Bucyrus and Motoren-Werke Mannheim Holding in important growth industries that are a great strategic fit and provide our customers an even broader range of products.”

“We also delivered for stockholders with outstanding financial results, beating our previous 2008 profit record of $5.66 per share by more than 30 percent. It was a great year for cash generation as well with our Machinery and Power Systems operating cash flow near $8 billion—our best year ever.”

Continue Reading
featured
619
Share LinkedinTwitterFacebookEmailWhatsApp
Subscribe to our newsletter
Sign up here to get the latest news, updates and special offers delivered directly to your inbox.
You can unsubscribe at any time
Leave a comment