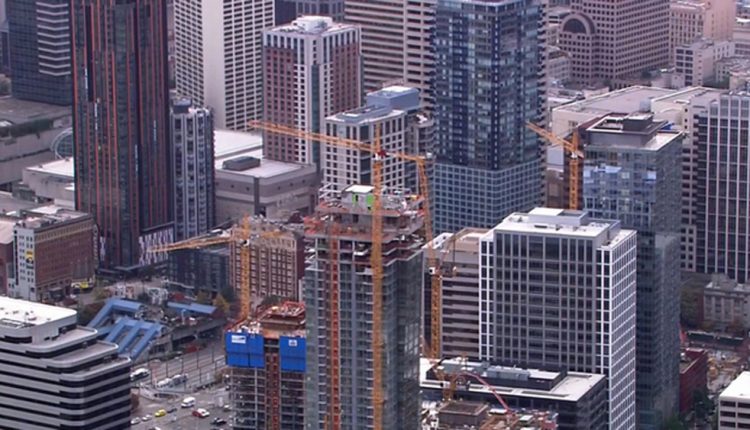 Seattle continues to lead the way in the country’s crane race.

The number of cranes in the city increased to 62 in the latter part of 2016, according to the Puget Sound Business Journal.
Back in October, reports showed Seattle had 58 cranes operating in the city over the summer. The Seattle Times reported the number of cranes grew 38 percent over the course of a year, the majority of which were found in downtown and South Lake Union.
Last year, the Rider Levett Bucknall Crane Index projected that there was no sign of things slowing.

“Based on current/future trends in the Seattle market, it is expected that crane activity has not yet peaked and will continue to climb in all sectors, as the demand for construction shows no signs of decreasing,” the Index states.

The RLB Index points out that while there are many projects in South Lake Union and downtown, other neighborhoods have crane activity as well, including Capitol Hill, Pioneer Square and the University District.
The Business Journal reports the number of cranes is decreasing in some major cities, including New York, Phoenix, and Los Angeles. Meanwhile, almost 50 percent of tower cranes currently operating in North America are in Seattle, Chicago, and Toronto, according to the Journal.

Continue Reading
348
Share LinkedinTwitterFacebookEmailWhatsApp
Subscribe to our newsletter
Sign up here to get the latest news, updates and special offers delivered directly to your inbox.
You can unsubscribe at any time
Leave a comment