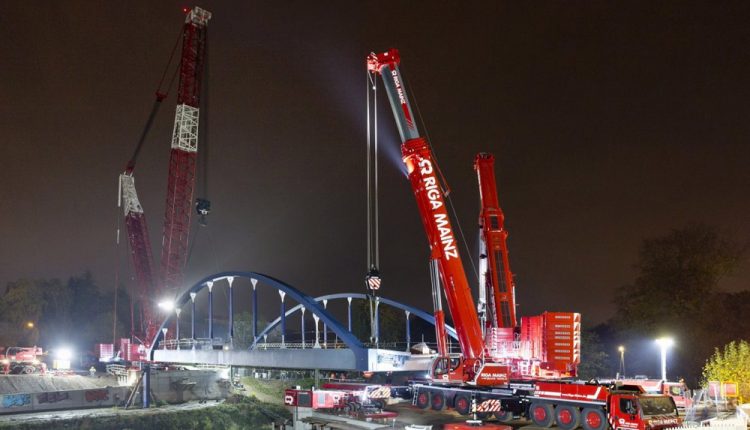 Riga-Mainz produced an impressive performance in a demanding crane and heavy load job involving the installation of a bridge in Essen during November. A steel bridge weighing 418 tonnes and measuring around 50 metres in length had to be positioned over a section of railway track. One of the cranes involved was the new Liebherr LTM 1450-8.1 mobile crane.

The fact that the multi-track section of railway over which the bridge was to be positioned had to be closed set the timetable for this tricky transport and hoisting work. The bridge had to be installed over the railway track below over the course of two nights with timeframes of just three and a half hours on each occasion. Initially, the plan was to install the bridge by pushing it into position. Since, however, the bridge is a parallelogram in shape when viewed from above and spans the tracks at an acute angle, it was decided that this approach was not the correct one for this job. It was replaced by an alternative installation concept developed by Uwe Langer, Managing Director of Riga-Mainz.

The massive steel construction, which had been assembled over the last few months on a neighbouring construction site, was transported to the site by Riga-Mainz on three SPMTs (self-propelled modular transporters). The construction towered around 15 metres above the railway tracks when the SPMT modules came to a stop near the southern abutment of the bridge.

Continue Reading
Liebherr-Werk Biberach GmbH
828
Share LinkedinTwitterFacebookEmailWhatsApp
Subscribe to our newsletter
Sign up here to get the latest news, updates and special offers delivered directly to your inbox.
You can unsubscribe at any time
Leave a comment