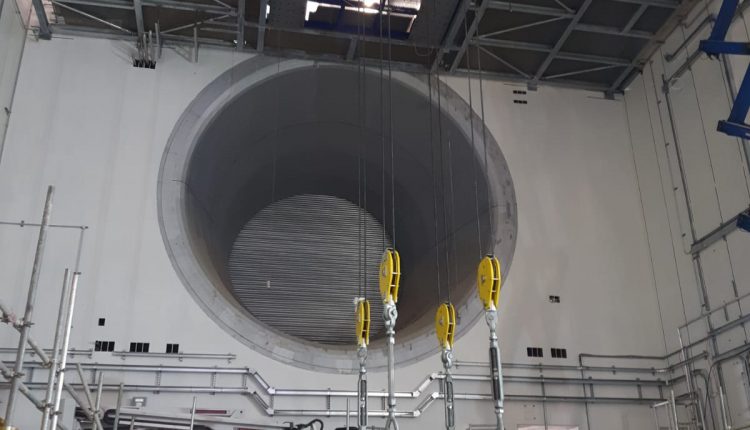 The so-called Testbed 80 was recently turned on at the Derby, UK site. Prior, RSS was asked to provide lifting, rigging, and load monitoring expertise. The site’s prime contractor is MDS Aero Support Corporation.

RSS accepted a scope of work to proof load test the T-bolt system underneath the thrust measurement system (TMS) and lift platform. Following Factory Acceptance Test (FAT), which evaluates equipment during and after the assembly process by verifying that it is built and operating in accordance with design specifications, RSS delivered the required third-party thorough examinations.

Steve Hutin, managing director at RSS, explained that the load tests were completed in four configurations: forward, starboard; forward, port; aft, starboard; and aft, port. The safe working load (SWL) of the system is 25t, but a proof load test to 31.25t was conducted, with the load split in four points: 15,233kg, 11,089kg, 2,852kg and 2,076kg (total 31,250kg). Hutin added: “We then rotated clockwise covering the four points, so we effectively tested it four times.”

Hutin alluded to the high profile of the sight, pointing out that, at the time of going to press, Testbed 80 had successfully completed its first engine run. Larger than a football pitch, the testbed conducted its first run on a Rolls-Royce Trent XWB engine. The project has been under construction for almost three years.

Hutin said: “I read an article recently saying the Derby site represents the world’s largest and smartest aerospace engine test rig. But more notable, it seems that Testbed 80 is built with changing the future of aerospace in mind, principally in terms of decarbonisation. To play a part, even as a third-party testing company, in such a landmark project is hugely rewarding. Utilisation of state-of-the-art load monitoring technology is a pre-requisite to working at such sites.”

Testbed 80 will be officially opened within months.

Continue Reading
#riggingChain SlingsLoad Cells
17
Share LinkedinTwitterFacebookEmailWhatsApp
Subscribe to our newsletter
Sign up here to get the latest news, updates and special offers delivered directly to your inbox.
You can unsubscribe at any time