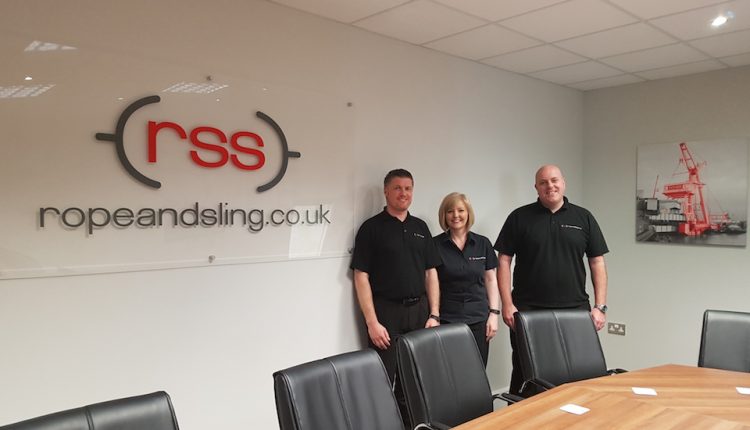 Rope and Sling Specialists Ltd. (RSS) has named two new directors, both promoted from within the company. Alan Varney, operations director; and Angela Holmes, finance director stepped into enhanced roles at the lifting and rigging equipment provider on 6 April 2017.

Varney and Holmes continue to be based at the company’s headquarters in Bridgend, South Wales, which is one of five—soon to be six—RSS facilities across the UK. Their combined experience with the below-the-hook equipment supplier spans nearly two decades, with Varney’s 10 years only one more than Holmes’ nine.

Steve Hutin, managing director at RSS, said: “The promotions are aligned with a level of growth that requires senior personnel to take on expanded roles. As we prepare to open a sixth location in northwestern England, it’s important that leadership and structures are in place to continue to deliver the world-class customer service and product knowledge that we have been renowned for at all altitudes of our upward curve. Alan and Angela have demonstrated knowledge, loyalty and other attributes that are duly recognised and appreciated.”

Varney, who has actually worked with Hutin over a period of 22 years, said: “My pride is really in being part of such a dynamic and professional company, but of course I acknowledge my new status as a director of the business and am grateful for the opportunity. My role has evolved consistently over the last decade in line with our growth and expansion so I am familiar with the adaptation that is required of me once again.”

Holmes, meanwhile, said: “I never anticipated this happening when I started here. I arrived as temporary cover from the accountant I was working for, then went self-employed and took them on as my own bookkeeping client until Steve offered me the job on a permanent basis. I remember, the year that I joined coincided with the start of the recession and the opening of our second depot, so financial planning was of utmost importance. We needed to change the accounting systems, whilst implementing stock control and IT structures to accommodate the growth.”

She added: “My role requires me to be very forward thinking. The detailed planning and timing involved in expansion is huge and the days that I spent just keeping the books up to date became fewer and further between. My role over the years changed to include staff training, HR and IT. I have been very lucky to have been involved in all aspects of running the business, not just the finance function.”

Hutin lauded Varney’s technical knowledge and credited him for a number of processes and procedures that have recently been put in place. Of Holmes, he said her accounts knowledge, particularly related to Sage software, has been instrumental in realising growth potential while honouring the commitments of a busy lifting equipment house on a daily basis.

He added: “Whether it’s been Alan’s dedication to DNV and ISO certification—I know he points to these as career highlights—or Angela’s commitment to overseeing migration from Sage 50 to Sage 200, both have conducted themselves with consummate professionalism and have always put our end goal, customer service, at the forefront of their endeavours.”

And continued: “Alan started as a manager working on the hire and sales desk, while Angela was a bookkeeper. They have since seen us build four websites, expand staff from eight to 50, move our headquarters, achieve a series of the industry’s most coveted accreditations, and more. Such successes wouldn’t have been possible without them. It shows what is possible through hard work, commitment to a cause and an unwavering customer service ethic.”

Continue Reading
@ropeandslingBelow the HookLifting Equipment
621
Share LinkedinTwitterFacebookEmailWhatsApp
Subscribe to our newsletter
Sign up here to get the latest news, updates and special offers delivered directly to your inbox.
You can unsubscribe at any time
Leave a comment