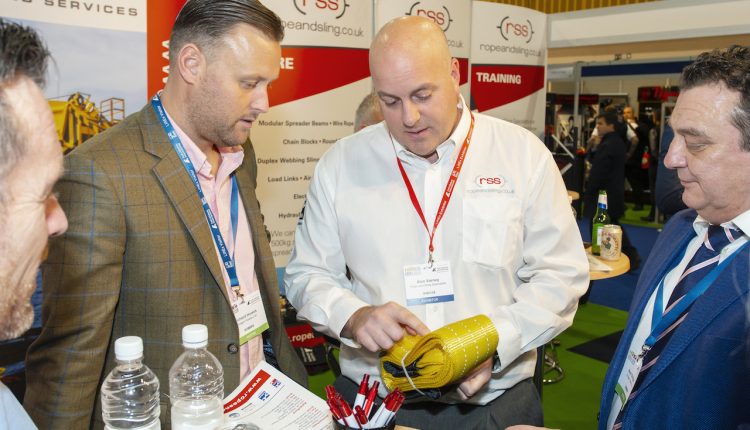 Rope and Sling Specialists Ltd. (RSS) will have a high profile at this year’s LiftEx, underpinned by gold sponsorship of the event, as organiser the Lifting Equipment Engineers Association (LEEA) marks its 75th anniversary.

Having debuted as an exhibitor at the 2017 show at The International Centre, Telford, RSS has steadily enhanced its presence at the annual exhibition. It was also gold sponsor of last year’s event at the Marshall Arena, Milton Keynes, where its exhibit was well populated throughout both days of the show. The LiftEx community will return to the same venue on 13-14 November; RSS will take a 24 square-metre stand (number 38).

LiftEx is in its 15th year, but the expo and co-located events are in a brighter spotlight this time given LEEA’s anniversary celebrations, which take various forms throughout the year. Importantly, RSS’s gold sponsorship overarches the entire event that includes educational and technical sessions; presentations on innovation; a packed exhibition floor; and the LEEA Awards dinner.

The association’s new enhanced awards scheme was greeted by much fanfare in 2018. It offers members eight distinct categories for which they can enter. An independent panel of industry experts will judge the entries. Winners will be announced and presented with their awards during a gala dinner by TV presenter Rachel Riley, a celebrity guest speaker.

Ross Moloney, CEO at LEEA, said: “This will be a memorable and prestigious event, helping LEEA to celebrate our 75th anniversary. I would also like to take this opportunity to thank our award category sponsors in addition to the event’s gold sponsor, Rope and Sling Specialists.”

Steve Hutin, managing director at RSS, said: “We’ve gained a lot of exposure out of the last two LiftEx shows, having visited to sample activity the year before that. It feels like this time there is greater energy around the event, given LEEA’s 75th anniversary celebrations and the success of the inaugural awards last year. It’ll be interesting to see how a return to the same venue—unusual for LiftEx—can build on what was achieved previously. The educational theme and safety-centricity of LiftEx aligns well with our company’s mantra and we had no hesitation in repeating an investment in one of the prime commercial packages on offer.”

Gold sponsorship offers RSS significant promotion before, during, and after the event, including logo placement, advertisements on show literature, and branded water-bottles that will be distributed free of charge throughout the Marshall Arena. A representative of the company will also attend an exclusive editor’s breakfast on the morning of the second day, where journalists from the industry’s key publications will be given access to the event’s protagonists.

Continue Reading
Below the HookLEEALiftex 2019
72
Share LinkedinTwitterFacebookEmailWhatsApp
Subscribe to our newsletter
Sign up here to get the latest news, updates and special offers delivered directly to your inbox.
You can unsubscribe at any time