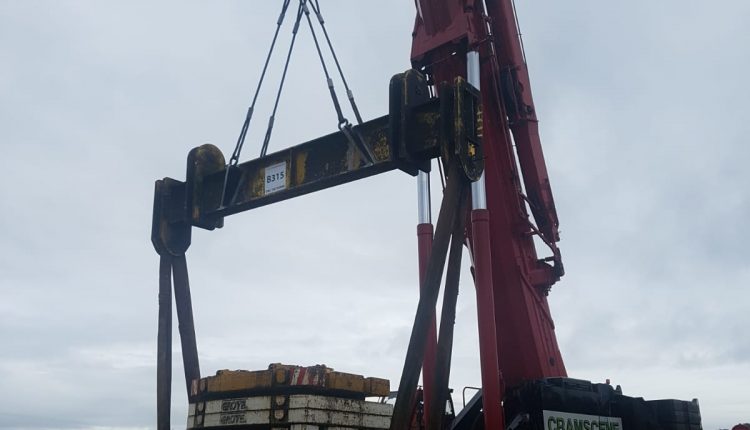 Tata’s Port Talbot and Llanwern sites are part of the Tata Steel Strip Products UK Business, which makes hot-rolled, cold-rolled, and metallic-coated strip steels. The integrated steelmaking sites use imported ore and coal to produce up to 3.5 million tonnes of hot rolled and cold rolled annealed in steel coils per annum, for a variety of different end uses.

RSS accepted a scope of work to add four new lifting points (two on either side) and proof load test the 100t capacity, 8,260mm-long lifting beam that would be used during an upcoming shutdown. The beam, which was originally 250t capacity and had a tare weight of 9t, was returned with four 35t capacity wire rope slings and four 35t capacity shackles for the top, in addition to a pair of 60t grommets for the bottom.

Upon completion of the modifications, a 450t capacity mobile crane and ancillary equipment were used at rental firm Cramscene Ltd.’s Leeds facility to test the beam to 113.6t, which was safe working load (SWL) multiplied by 1.04 with an addition of 9.6t, to comply with relevant standardisation. Finite element analysis (FEA) and magnetic particle inspection (MPI) followed. MPI is a non-destructive testing (NDT) process for detecting surface and shallow subsurface discontinuities in ferromagnetic materials, as Gary Coleman, site engineer at RSS, who was involved with successful execution of the project, explained.

Steve Hutin, managing director at RSS, said: “This project reiterates the importance of using specialists for any matter involved with lifting and rigging gear. The level of engineering and subsequent testing required even for a relatively straightforward modification could only have been delivered by engineers who deal with below-the-hook and other lifting equipment first and foremost, not as an additional service on the periphery of a broader operation.”

He added: “Overhead lifting and rigging equipment, such as lifting beams, is key to productivity in any steel sector environment, where critical lifts are commonplace. Broader industry should look to the best practices of pioneers in the market, like Tata Steel, and replicate safety procedures, protocols, and supply chain strategy, at the core of which is a commitment to working with specialists in each field of expertise that relates to their work.”

South Wales has a proud heritage in steel, dating back more than a hundred years. In addition to Port Talbot and Llanwern facilities the region is also home to Trostre and Orb sites. The steel made by Tata in South Wales makes its way into an array of end products, from cars to construction machinery, from the Millennium Stadium to filing cabinets and fridges.

Continue Reading
Below the HookLifting BeamsOverhead Lifting
771
Share LinkedinTwitterFacebookEmailWhatsApp
Subscribe to our newsletter
Sign up here to get the latest news, updates and special offers delivered directly to your inbox.
You can unsubscribe at any time