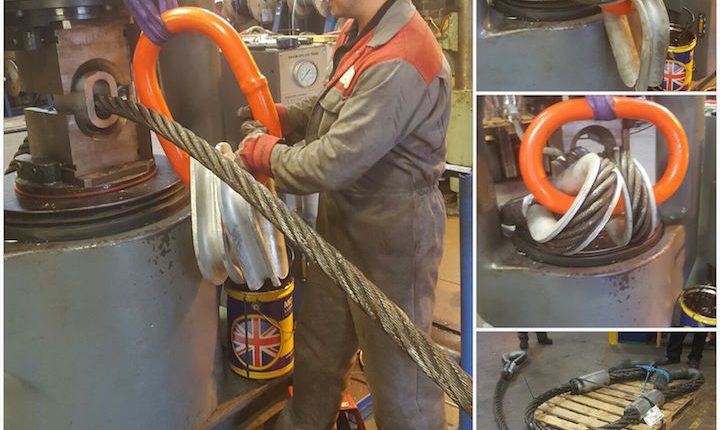 Rope and Sling Specialists (RSS) has supplied lifting and rigging equipment for the Mare Harbour upgrade project, part of a massive modernisation of the military infrastructure on the Falkland Islands, a British overseas territory off the coast of Argentina.
Mare Harbour is a small settlement on East Falkland, on Choiseul Sound, primarily used as a port facility and depot for RAF Mount Pleasant, located about 15km north. An upgrade is underway to make the harbour suitable for larger vessels, namely the POINT Class ships, with roll-on roll-off capability of the Falkland Islands Resupply Ship (FIRS). There are approximately 10 FIRS sailings per year, which deliver military supplies including hardware, food and commercial freight to the Falkland Islands.
RSS has supplied wire rope slings, web slings, round slings, shackles, hydraulics, chain slings and wire rope to civil engineering and maritime service provider VolkerBrooks, part of VolkerStevin, which agreed the £19m upgrade—£180m will be invested in the Falklands over the next 10 years—with the Defence Infrastructure Organisation (DIO).
Alan Varney, depot manager at RSS headquarters in Bridgend, Wales, said: “The opportunity to supply such a landmark and important project represents a great start to 2017 and once again demonstrates our capability to manufacture and source lifting equipment for demanding applications to a short lead time.”
RSS received the order on 9 January and committed to delivery to Morecambe in Northwest England two weeks later. The shipment, which filled 15 pallets, included 35t and 25t capacity wire rope slings manufactured by RSS in addition to chain slings of various sizes that were also assembled at the South Wales facility.
Varney added: “Our 1,000t Sahm Splice hydraulic press enables us to manufacture slings up to 55t working load limit (WLL), which is a capability that is generating significant and ongoing interest from industry. We have adapted our manufacturing processes to enable us to meet this demand within the stringent time constraints often associated with orders for such equipment.”
VolkerBrooks (formerly Humby and Brooks), acquired by VolkerStevin in 1937, placed the order with RSS, which already supplies, hires and inspects lifting equipment for the specialist service provider. VolkerBrooks is committed to maintaining the highest standards of workmanship supported by its suppliers, systems and facilities to provide an efficient and effective service.
Rob Coupe, managing director at VolkerStevin, said: “As a specialist in marine construction works, we look forward to working on this design and build project for the roll-on roll-off facility upgrade. We’re pleased to be working as part of this investment to modernise military infrastructure on the Islands and look forward to starting.”

Continue Reading
Below the HookLifting EquipmentPorts and Harbours
571
Share LinkedinTwitterFacebookEmailWhatsApp
Subscribe to our newsletter
Sign up here to get the latest news, updates and special offers delivered directly to your inbox.
You can unsubscribe at any time
Leave a comment