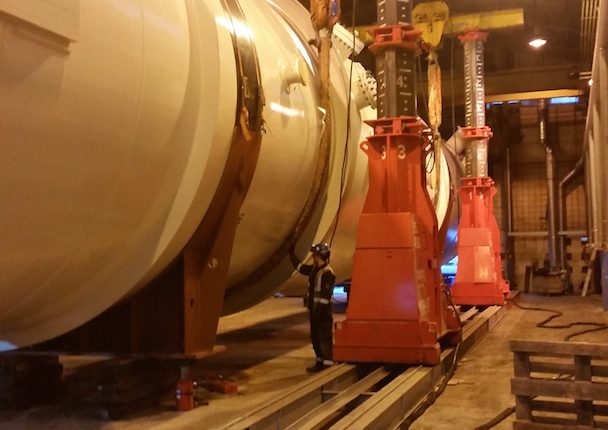 RSS fulfilled the scope of work from its Rotherham facility to provide maximum gross weight of the 28.3m (92 ft.)-long, 5.6m (18.3 ft.)-diameter load; proof load test a spreader beam; and supply rigging equipment, including roundslings and shackles.

The weighing operation was to be completed at Kilnhurst prior to transportation of the unit, bound for the Johan Sverdrup oilfield on the Norwegian shelf, where the spreader beam and other equipment would be utilised.

The vessel, which RSS calculated at an average of 116.1t after three lifts, was manufactured for ETA Process Plant, a specialist in deaeration (the removal of air molecules from gas or liquid) and part of Koch-Glitsch. It will be installed in its end application by international energy conglomerate Statoil at Sverdrup, where there are expected resources of between 1.9 and three billion barrels of oil equivalents.

Steve Hutin, managing director at RSS, said: “The myriad of leading global brands that were associated with the manufacture, transportation, lift and use of the vessel made it an extremely rewarding project. It’s fascinating, and uplifting, that the onward journey of this hulking offshore unit was reliant upon the safe and efficient application of our below-the-hook technologies, expertise and equipment.”

Roundslings, of 125t capacity, combined with Ainscough Industrial Services’ Mega Lift. The machine lifts by extraction of legs, contrary to conventional gantries that use a lifting device such as a winch or a strand jack. The gantry system and load can be slid on tracks. Conventional gantries aren’t available for weights of this size, Hutin explained.

The vessel was lifted by the Mega Lift 250mm to enable the compression load cells to be placed beneath it at predetermined positions. At that stage, Ainscough was responsible for lowering the vessel onto the load cells so measurements could be taken using Straightpoint’s desktop controller datalogging software package. Two temporary stools were used, weighing 2.4t each, which had to be factored into the final calculations.

Whilst onsite, RSS also proof tested a spreader beam to 172t, which will travel with the unit and other rigging items to place the deaeration vessel in its final offshore location.

Continue Reading
#riggingBelow the HookBridger Howes
630
Share LinkedinTwitterFacebookEmailWhatsApp
Subscribe to our newsletter
Sign up here to get the latest news, updates and special offers delivered directly to your inbox.
You can unsubscribe at any time
Leave a comment