For scale, no show in Scotland can rival the Royal Edinburgh Military Tattoo. Held for three weeks in August on the esplanade of Edinburgh Castle in the capital of Scotland, its series of military tattoos — performed by British Armed Forces, Commonwealth and international military bands and other artists — attracts 220,000 attendees each year. Seating for the 8,700 spectators who attend the event’s daily performances is provided by a grandstand that is specially erected for the tattoo every year. The installation of safety netting is part of its construction — a job that has been performed by safety netting specialists Peoples Safety Ltd. using a Genie® boom lift equipped with a Genie Lift GuardTM Fall Arrest Bar.

A member of FASET (the trade association and training body for the safety net rigging and temporary safety systems industry), Peoples Safety first saw a demonstration of the Genie Lift Guard Fall Arrest Bar system during the association’s annual general meeting earlier last year. Craig McKenna, Contract Manager for Peoples Safety, says: “As safety systems specialists, we are always interested in new solutions that allow us to work safely and more efficiently, particularly when they have been as rigorously tested as the Genie Lift Guard Fall Arrest Bar. As the first and only system of its kind to be officially certified as a Personal Protective Equipment (PPE), the Genie Lift Guard Fall Arrest system has the certification we need to respond to the HSE constraints of our daily work.”

He continues: “With some 4,500 m2 worth (48,438 ft2) of netting to rig in just five days, the Edinburgh Tattoo is a challenging project that provided a perfect opportunity for our team to really put the Genie Lift Guard Fall Arrest Bar to the test.” 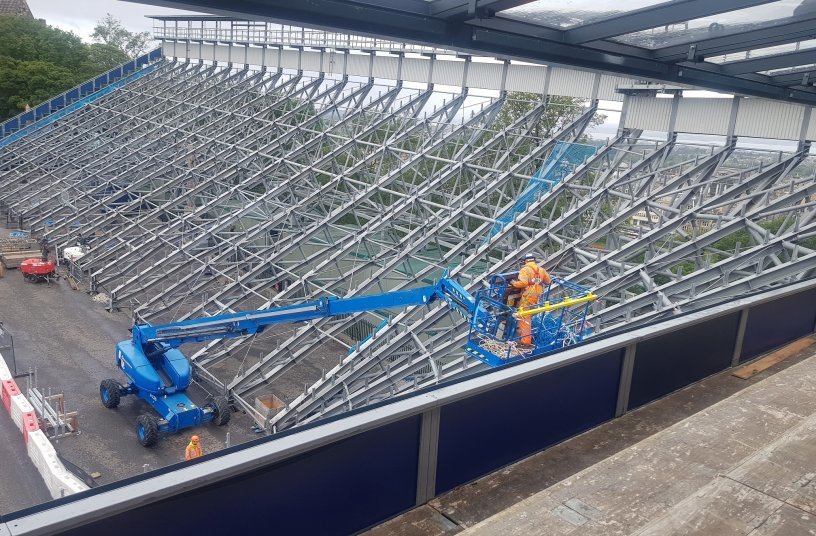 With only three days allocated to complete the grandstand, construction work demanded erecting a steel framework that was then covered by tiered boarding, which served as stair access and as a support for the installation of individual seating. The task of the Peoples Safety team involved rigging safety netting beneath and on the outer edges of the framework to protect people working on the construction, and once completed, spectators seated on the outer edges from the risk of falling from height.

As McKenna explains: “Although all our operators are fully certified and highly experienced, and even though they had already performed the task several times before, this job demands the ability to work at a very steady pace, often outside of the platform.”

He continues: “In the past, our operators had found that the various forms of fall arrest systems that we were using were often inconvenient and slowed them down. This year, thanks to the self-retracting lanyard and sliding rail of the Genie Lift Guard Fall Arrest Bar system, our operators found that they were able to focus on their job while remaining safety attached without the hazard of tripping or being hindered by the inertia block and pendulum effect that they had experienced before using other fall arrest designs.”

McKenna finishes: “They also benefitted from a greater working area to move around in when outside the platform while staying constantly connected to the boom, which made the process easier and more comfortable. As far as we are concerned, the Genie Lift Guard Fall Arrest Bar has successfully passed our test for this job. And when it comes to using it again, the answer is a definite ‘yes’!”

Genie boom lifts have been designed and successfully tested to withstand the force of a free-falling 136 kg (300 lb) test mass. As such, specific Genie boom lifts can themselves be considered as “external reliable anchorage points.” Specifically designed for use with Genie booms, the Genie Lift Guard Fall Arrest Bar is the first accessory of its kind in the industry to distinguish itself by being officially certified as a PPE of category 3 by an EU Notified Body.

Comprising a yellow, sliding, enclosed horizontal track that allows the lanyard to glide smoothly along the full length of the platform, the Genie Lift Guard Fall Arrest Bar extends the working reach outside and around the perimeter of the platform, enhancing ease of access and comfort while keeping workers safely attached externally to the platform.

Compatible with all Genie 1.83 m (6 ft) or 2.44 m (8 ft) platforms, its simple bolt-on design makes it easy to install for fast set-up or removal within 15 minutes. In addition to increasing productivity for tasks that require working outside the platform, this system is a more practical and cost-efficient PPE alternative to traditional fall arrest and temporary edge protection and guarding rail systems.

Continue Reading
399
Share LinkedinTwitterFacebookEmailWhatsApp
Subscribe to our newsletter
Sign up here to get the latest news, updates and special offers delivered directly to your inbox.
You can unsubscribe at any time