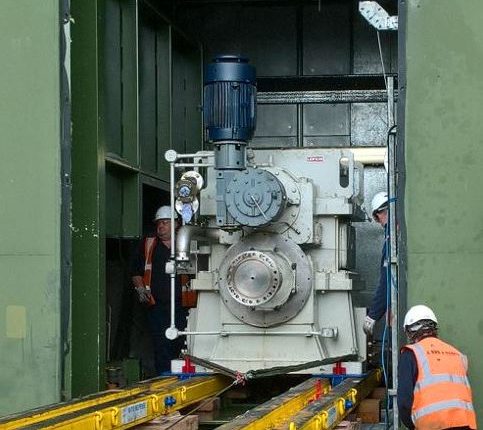 RRS, which was recently named the only international sales partner of the Canadian manufacturer of hydraulic skidding equipment, accepted a scope of work from Doosan Babcock to remove the gearbox from within a confined space in a plant room, deliver it for refurbishment and return it to the site for reinstallation.

The gearbox, measuring 2.6m x 1.6m x 1.9m, was slid out approximately 3m inside the facility and then carried by a Versa-Lift forklift to an awaiting three-axle Faymonville semi-low loader from the RRS fleet, upon which the unit was secured before transportation from the site.
Prior to the removal operation, RRS jacked up the gearbox and placed four 50t wireless compression load cells from Straightpoint underneath it to get an accurate weight measurement. Paul Barber, managing director at RRS, explained that the exact weight was required because the site was tight on space and the Versa-Lift jib had to be kept as short as possible.
The HT300 was chosen because the plant’s floor was not part of the building’s structure and only had load-bearing points on the outer edges. The skidding system was self-supporting across its length due to the relatively low weight of the gearbox in relation to the system’s overall capacity.
Barber added: “Several companies had looked at the task before us but nobody else had proposed a solution that didn’t involve stripping down the plant room so a large crane could lift out the gearbox. That would have been time consuming and inherently problematic given the close proximity of overhead cables to the working area.”
However, utilising the Hydra-Slide HT300 still required extensive planning to overcome the confined space. Having jacked up and weighed the unit, RRS employed 200mm x 100mm x 1m hardwood blocks to support it, while a 12t Valla from its mini-crane fleet lifted the skidding system’s tracks. Once the tracks were in position, the gearbox was slid away from connectors before turning it 90 degrees so it could fit through the door.
Barber said: “The ground was not in good condition so we had to lay steel plates on the floor to distribute the point loads. Further, the workplace was a live power generation situation so health and safety was of paramount importance. We were onsite for two days for the removal and two days for the return.”
Such was RRS’s commitment to making the job as safe as possible, the site’s safety manager awarded certificates to all personnel involved. Jon Blampied, Martin Tupper, Bob Counsell, Adam Sherville, Dave Sullivan and Gary Jones also received £20 Amazon vouchers each. Barber concluded: “We are very proud of SSE’s recognition. The team were awarded for the way the project was carried out in a safe manner, with the whole team working safely and visibly showing a culture of safe working.”

Continue Reading
Valla
436
Share LinkedinTwitterFacebookEmailWhatsApp
Subscribe to our newsletter
Sign up here to get the latest news, updates and special offers delivered directly to your inbox.
You can unsubscribe at any time
Leave a comment