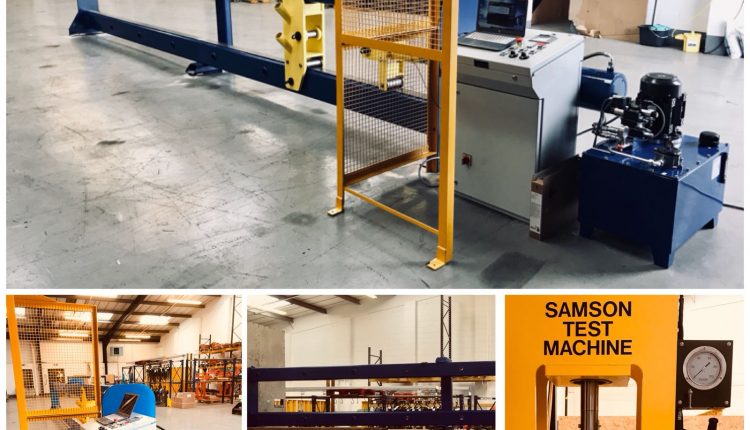 Rope and Sling Specialists (RSS) has installed two new testing machines at its most recently opened depot in Warrington—a year after collecting the keys for the facility in the northwest of England.

A 60t fixed, horizontal test bed from AJT Equipment Ltd. and a 100t Worlifts jack tester were both delivered last month (May) as the machines, which will be utilised to generate and respond to demand, become immediate focal points of the 6,500 sq. ft. workshop.

Steve Hutin, managing director at RSS, said: “We purchased the machines outright so timing the investment was important. There would have been little to gain in getting them delivered as we opened the doors, while waiting for demand that equated to constant utilisation would have resulted in turning away too many customers. It’s not a precise science but we’re confident the timing is right to make this commitment to the local marketplace, buoyed by favourable conditions in the heavy-lift sector, in particular.”

Hutin is well equipped to make that assessment having overseen the installation of equipment at other depots—RSS has locations in Heathrow, London; Aylesford, Kent; Rotherham, Yorkshire; Grangemouth, Scotland; and Bridgend, Wales, the company’s de facto headquarters—that have taken similar journeys. There are 120t test beds in Pyle and Grangemouth, while Rotherham and Aylesford each have 60t units, which cover most of the company’s tensile testing requirements on chains and wire rope, for example.

The new tensile test machine will enable RSS to conduct proof load, destruction, and long life cyclic testing of samples. Utilising a modular construction the machine can be made to any length required and, importantly, can be extended at a later date if required. A rolling carriage is included to give the advantage of multiple test lengths along the entire machine length. The 100t ‘Samson’ test rig, meanwhile, is a compact, vertical machine, manufactured specifically with lifting equipment service and supply companies in mind.

Until now, the company’s splicing capability is limited to the Pyle site, where a 1,000t Sahm Splice hydraulic press produces 55t capacity, 64mm diameter slings, while 35t capacity, 52mm diameter slings are made by a smaller Talurit unit. However, Hutin said expansion of the fleet is inevitable—at Warrington and other facilities in due course.

He concluded: “Business [in Warrington] is progressing in line with our expectations; it can take up to two years to get a new depot fully up to speed so to commit to a major installation of testing equipment after 12 months is testament to the hard work that has been put in by the now five-strong team at the site and the positive response we have received from the market.”

Terry Quinn is currently in charge of external sales, while Geoff Clay looks after internal sales. Both can be contacted at 01925 817 848.

Picture caption: The test bed and jack tester have been installed on the 6,500 sq. ft. workshop floor.

Continue Reading
#Rope and Sling Specialists RSSAJT EquipmentChains
673
Share LinkedinTwitterFacebookEmailWhatsApp
Subscribe to our newsletter
Sign up here to get the latest news, updates and special offers delivered directly to your inbox.
You can unsubscribe at any time