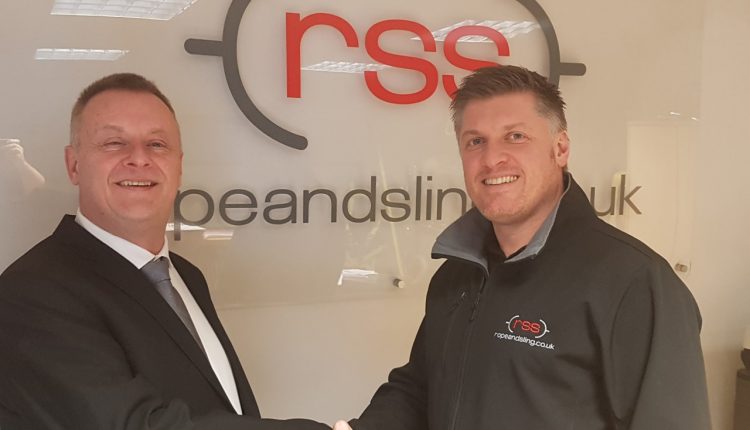 Rope and Sling Specialists (RSS) has named Sean Maslen regional sales manager for the southwest, as the lifting and rigging equipment supplier continues to execute its growth strategy and expand across the UK.

Maslen, of Pennymoor near Exeter, stepped into the field-based role at the start of the month (February), looking to leverage nearly three decades of experience in the below-the-hook marketplace, which has included spells at some of the industry’s largest companies. He will focus on promoting RSS’s range of equipment and services in a region that includes a number of existing hotbeds for lifting activity. Maslen will also gather market intelligence with the company poised to open a seventh depot in the near future.

RSS currently has locations in Heathrow, London; Aylesford, Kent; Rotherham, Yorkshire; Warrington, Cheshire; Grangemouth, Scotland; and Bridgend, Wales, the company’s de facto headquarters and the closest existing facility to Maslen’s territory. However, Steve Hutin, managing director, has been candid about plans to expand that to 10 sites, and the southwest is among a number of areas of primary interest.

Maslen said: “The opportunity presented itself quickly upon conclusion of another regional sales position that ran its course. I have gained knowledge from working on some of the UK’s landmark sites, from Heathrow’s Terminal 5 to major shutdowns at oil refineries. I’ve got a significant, current contacts book and have been given an opportunity to apply it to one of the most dynamic and meaningful growth programmes in the lifting industry [at RSS].”

Hutin responded: “I’ve spoken extensively about our plans to open additional sites, which I think is key to delivering a tailored, doorstep service to the UK’s varied, regional markets. However, we have to make sure we time such expansion correctly; we’re well practiced in these processes. In the immediate term, we’re focussed on giving Sean the support he needs to plant seeds in a potentially lucrative geography. Expansion of any kind relies upon acquisition and retention of the right personnel and our offering is strengthened considerably by Sean’s arrival.”

Appointments with purchasing decision makers at petrochemical sites, naval facilities, refineries, and other locations are already etched in Maslen’s diary, as he returns his focus to loose rigging gear and a lifting-centric product portfolio more aligned with his skillset and core values. It’s notable that Hutin’s recent appointments have stressed the importance of working with lifting equipment specialists in this sector. And Maslen echoed similar sentiments.

He said: “I applaud the stance Steve and the company have taken in opposition to the tool hire mentality that is endemic in certain corners of our industry. There are alternative providers that have diversified into plant rental, for instance, but it is my belief that end users should only source rigging gear and related services from those specialised in the sector and, moreover, serve as bastions for the competence-based expertise that supports it.”

Outside of the workplace, Maslen is a keen golfer and closely follows the fortunes of England’s Jekyll and Hyde cricket team.

Continue Reading
Below the HookLifting EquipmentRigging Equipment
941
Share LinkedinTwitterFacebookEmailWhatsApp
Subscribe to our newsletter
Sign up here to get the latest news, updates and special offers delivered directly to your inbox.
You can unsubscribe at any time