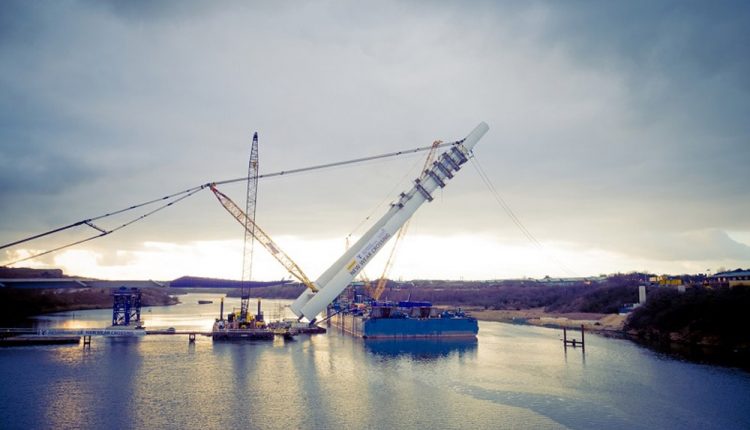 Sarens has transported and installed a 1,700-tonne pylon from Belgium to Sunderland, UK, for the New Wear Crossing bridge, which is scheduled to open in 2018.

The bridge will span the River Wear from Castletown to Pallion in the north east of the UK, according to Sarens, its centrepiece will be the 105 m high pylon.
Carl Sarens, director of global operations and technical solutions, Projects & Engineering, explained that the project was extremely complex, and involved close collaboration with the Farrans-Victor Buyck (FVB) team.
FVB, the joint venture between Farrans and Victor Buyck Steel Construction, began work on the project in May 2015 which has an overall approved budget of GBP117.6 million (USD146.2 million).
As part of the operation’s first phase, Sarens used barges to transport the pylon from the Victor Buyck Steel Construction yard in Ghent, Belgium to Sunderland.

“The first challenge was slowly manoeuvering the pylon out of the fabrication yard and onto the two canal barges,” explains Sarens.
The pylon had to be jacked down onto Sarens’ twin barges, Jozef-Rosa and Karel-Victor, using a combination of Sarens’ PJ250 jacking system and jack & pack with 52 axle lines self-propelled modular transporters (SPMT).
“This was a slow process because the ballast of the barges had to be carefully adjusted throughout the operation,” explained Sarens.

Once the pylon was secured, the team had to manoeuvre it along tight canals, under a series of low bridges, and into the Port of Ghent. During the journey, Sarens operators had approximately 0.3 m of margin on all sides of the pylon to clear the bridges.
In the Port of Ghent, the pylon was then transferred to Sarens’ larger seafaring barge, Louis.

The pylon was transferred using SPMTs and ballasting of the barges. Once onboard the Louis, the pylon was rotated 90 degrees and set down on its sea-fastening supports.
Once at the pylon’s final destination, the Sarens team lifted and positioned it at its full height.

Continue Reading
644
Share LinkedinTwitterFacebookEmailWhatsApp
Subscribe to our newsletter
Sign up here to get the latest news, updates and special offers delivered directly to your inbox.
You can unsubscribe at any time
Leave a comment