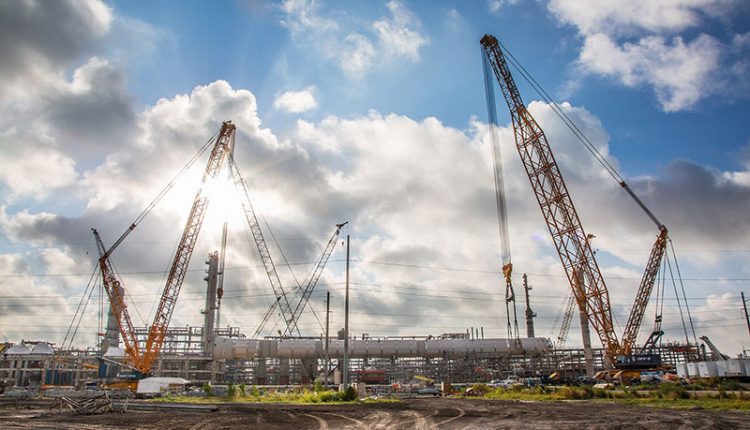 The art of successfully completing a difficult single-object lift, like a massive distillation column used in the petrochemical industry, is all about selecting the right lifting equipment with the right configuration. There may be multiple crane types and models to complete the lift. However, which crane will allow the contractor the ability to get it done in the least amount of time and with the lowest cost?

Recognized as a world leader in heavy lifting and engineered transports, The Sarens Group of Wolvertem, Belgium, frequently faces this decision when it comes to making challenging lifts. Recently, the company received a contract to lift a 707-ton, 285.8-ft.-tall distillation column in the Gulf Coast region of the United States. Sarens has two locations—Dickinson, Texas, and Sorrento, La.—to support its Gulf Coast customers.

Planning for the job came down to two potential lifting options. The first included a tower type system to incrementally lift the vessel into position. “This option,” says Cody Meeker, regional sales manager – North America for the Sarens Group, “would have been extremely labor-intensive. Assembly and disassembly time is much longer than using a lattice boom crawler crane.”

The challenge with Sarens’ second option, using a crawler crane to lift such a massive object, is finding one that offers the capacity in a relatively mobile friendly design, so transporting the crane is cost-effective and efficient. Sarens’ Terex CC 8800-1 lattice-boom crawler crane, one of the most powerful series-produced mobile cranes in the world, was a good match, since it offers a maximum capacity of 1,764 tons and is designed for world-wide transportation. “With over 40 units in existence and 10 units in our fleet, there is no question regarding its performance and transportability,” adds Meeker.

There was one drawback to this mobile crane option: The distillation column was to be set at a 91.9-ft. radius and required a 315-ft. main boom length. In this typical application with planned counterweight package, the CC 8800-1 crane’s capacity would be just over 811 tons, not quite enough to make the required lift with the site elevation limitations and limited rigging headroom above the vessel.

This gave Sarens the opportunity to use its new Boom Booster kit, recently introduced by Terex, which increases lift capacities of the CC 8800-1 crane for just these applications.

The Terex Boom Booster kit elevates the CC 8800-1 crane’s performance, particularly when working with steep and long boom configurations. “Our Boom Booster allows our 1,764-ton class crane to out lift any crane model in the 1,100- to 2,200- ton class and some 3,300-ton capacity cranes under certain conditions,” says Guntram Jakobs, product marketing manager for Terex Cranes.

For the Gulf Coast distillation column project, Sarens used both the upper and lower transitioned segments plus the five intermediate segments. In this configuration, 236 ft. of the CC 8800-1 crane’s 354.3-ft. boom consisted of the Boom Booster kit. “This increased the crane’s lifting capacities by 5% for this configuration, giving us the necessary increased capacity and rigging headroom to lift the vessel,” says Travis Stav, Sarens’ engineering manager.

This increased the crane’s capacity at the working length and radius from just over 811 tons to more than 852.4 tons. Jakobs mentions that in other applications, the Terex Boom Booster can increase capacity upwards of 90%, depending on configuration and work radius.

Sarens dispatched a convoy of 92 trailer loads of CC 8800-1 crane components for the 200+ mi., four-hour trip to the Gulf Coast construction site. “Since this is a series-produced crane,” mentions Jakobs, “none of its components are wider than 11.5 ft. And they all can be stripped down to a shipping weight of less than 44 tons.”

The Boom Booster kit segments are designed for quick, low-cost transportation as well. “Each segment can be disassembled and shipped in standard 40-ft. open-top container,” explains Jakobs. As the trailers entered the jobsite, Sarens’ 15-person crew began to assemble the crane. From the first steel crane mat set to boom-in-the-air and hook-ready, it took a total of eight days for crane set up.

To lift the 707-ton column at the 70.7-ft. radius required the 354.3-ft. main boom with a 26-part line. Crews placed a total of 518 tons of counterweight on the Superlift tray, which was operated at a 131.2-ft. radius. “We had limited Superlift tail swing clearance due to a power transmission line adjacent to where the distillation column was placed,” mentions Stav. Jakobs adds, “The Superlift offers a variable operating radius to adapt to jobsite and lift capacity needs.”

All the transport and assembly efforts came down to a single lift, made cleanly within a few hours the morning after the crane was hook-ready. “Throughout the entire lift the CC 8800-1 crane ran smoothly,” mentions Stav. “The operator was able to provide precise movements requested by the client to position the load with ease.”

The challenge during the lift was to make sure the combined weight of the crane lifting the column did not exceed the maximum ground bearing pressure, capped at 2,500 lb./ft.2. The crane’s two massive 47.4-ft.-long x 6.6-ft.-wide tracks helped to disperse the load. “The crane also provides real-time ground pressure to the operator on a display inside the cab, so he knows the crane is within load-bearing limits,” mentions Stav. After the lift was completed, the crane components were dismantled, and the CC 8800-1 crane was shipped back to Sarens’ yard. The entire project took a total of four weeks.

Sarens’ Meeker credits the continuing support from the Terex team as one reason why the lifts with the 1,764-ton capacity class crane go so smoothly. “Terex after-sale support is key to maintaining the CC 8800-1 in peak shape,” he says. “With the technical support provided by Terex Cranes Service Trainer Sönke Eichhorn, we have been able to perform every time without fail.”

Continue Reading
Terex Corporation
468
Share LinkedinTwitterFacebookEmailWhatsApp
Subscribe to our newsletter
Sign up here to get the latest news, updates and special offers delivered directly to your inbox.
You can unsubscribe at any time
Leave a comment