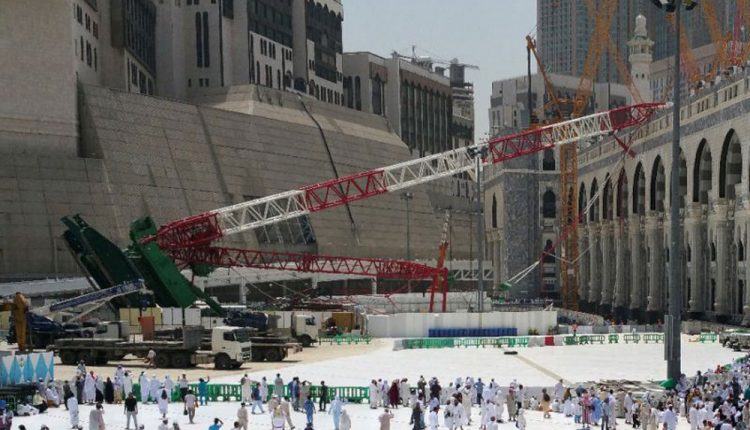 Riyadh (AFP) – A Saudi court on Thursday dismissed charges against 13 accused over a crane collapse that killed dozens at Islam’s holiest site, a newspaper reported on its website.

The prosecution objected to the ruling and asked to appeal, said the Okaz daily, which has closely followed the case.
The accused included at least one Saudi “billionaire” and nationals from Pakistan, the Philippines, Canada, and several Arab countries, Okaz and Saudi Gazette newspapers reported when the trial began in August.

Five months on, the criminal court in Mecca on Thursday said it did not have jurisdiction to hear cases involving “safety breaches”, Okaz reported.
There was no clarification why today’s report referred to 13 accused, while 14 have previously been mentioned.
They were charged with “negligence leading to death, damaging public property and ignoring safety guidelines” at the site of the Grand Mosque crane collapse in September 2015, Okaz and Saudi Gazette said.

During severe winds a construction crane toppled into a courtyard of the mosque.

It was one of several cranes the Saudi Binladin Group had employed as part of a multi-billion-dollar expansion to accommodate increasing numbers of faithful.
At least 109 people died, including foreign pilgrims, leading King Salman to suspend the firm for several months from new public contracts.

Okaz and Saudi Gazette reported last week that Judge Abdulaziz Hamoud al-Tuairki had rejected a plea from defence lawyers to prevent newspapers from covering the case.

He said they could appeal his ruling.

The court would in the next two weeks review the entire case, the newspapers said at the time.

Saudi Binladin Group, which developed landmark buildings in the kingdom, was founded more than 80 years ago by the father of Al-Qaeda leader Osama bin Laden, who was killed by US Navy SEAL commandos.

Like other construction firms in the kingdom, Binladin Group suffered last year from delayed government receipts after a collapse in oil revenues left the kingdom unable to pay private firms.

The company last year said it had completed payment to 70,000 laid-off employees.

Workers still with the firm would get their back pay as the government settled its arrears, Binladin Group said.

A company spokesman could not be immediately reached to comment on the court case.

Mecca draws millions of pilgrims annually from around the world.

The kingdom wants to boost those numbers and develop religious tourism as part of wideranging economic reforms.

Continue Reading
607
Share LinkedinTwitterFacebookEmailWhatsApp
Subscribe to our newsletter
Sign up here to get the latest news, updates and special offers delivered directly to your inbox.
You can unsubscribe at any time
Leave a comment