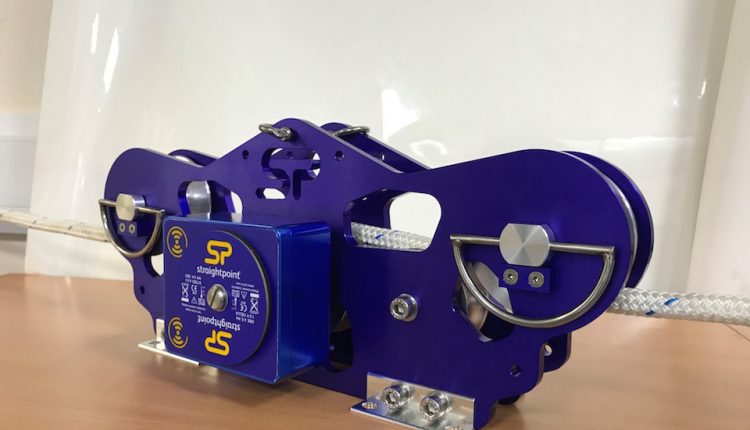 SP debuted at the annual conference and exhibition last February, where it staged the successful launch of its Clamp On Line Tensionmeter (or COLT), used for measuring tension on static wire rope lines. CableSafe represents continued evolution of a range of equipment targeted at the broadcast and telecommunications tower erection, service, and maintenance industry.

Over the last 12 months, the COLT’s gaining popularity between plumb and tension professionals has been matched by an increase in demand for a smaller product for measuring tension on synthetic ropes and cable. NATE attendees will be principally interested in the CableSafe’s ability to measure loads introduced into a tower, which vary with different gross loads and tag forces.

Brian Bicknese, vice president of field services at telecommunications infrastructure company Vertical Limit, said: “The line pull forces must be engineered to ensure the structural capacity of the tower is not compromised. Monitoring these loads ensures the forces introduced do not exceed certain limits, which serves as an additional safety measure in real world scenarios that may vary from rigging plans.”

Wayne Wille, technical sales manager at SP, added that, in these applications, customers would typically use either 0.5 in. (13mm) or 5/8 in. (16mm) synthetic rope with the CableSafe capacity set to 1 ton.

Visitors to SP’s booth (419) at NATE will learn how the product can be connected to the manufacturer’s new Bluetooth app for smart devices; has two user friendly release pins for rope installation; and offers an outdoor rating of IP67 / NEMA6. The product is also suited to use with winch pulls and trailers; pulling fiber optic leader cable; water gates for dams; cranes; offshore rescue and retrieval; and, significantly, capstan load monitoring.

Capstans, utilizing a revolving cylinder for winding a rope, are used in construction and other industries to hoist and pull loads. In these applications, CableSafe monitors line pull tension to ensure cables are not over-stretched, which can result in reduced transmission capability, fire hazards, removal of damaged cable, and increased liability for contractors, as well as monitoring line pull for safe working load limits.

David Ayling, director at SP, said: “When working between floors or around tight corners in a building, it’s difficult to know how much force is safe to apply to a cable; it might become snagged, for example. Further, many contractors now require proof that force did not exceed the cable’s limit during installation. We have developed a solution that communicates the forces applied so adjustments can be made before damage occurs and, upon completion of the installation, a report can be supplied proving that the cable was not put under undue stress.”

While CableSafe and COLT will be showcased at NATE, the former is actually more closely related to SP’s other tensionmeter, the Running Line Dynamometer (or TIMH), which is designed with dockside, marine, offshore, towage and salvage applications in mind. Ayling recently confirmed that a number of enhancements have been made to the TIMH.

SP has increased the capacity of the standard range from 80t to 150t (higher capacities can still be manufactured upon request). The larger unit can accommodate 2 to 3.5 in. (52 to 89mm) wire rope, up from 1.5/8 to 2 in. (40 to 52mm). Meanwhile, the electronics have been improved so the TIMH now measures pay in / out directions and speed, in addition to tension and lineout.

Straightpoint, with offices in the U.K. and the U.S., has been providing load cells to companies around the world to ensure their loads are safe to lift, offload, pull or push for over 40 years. Straightpoint’s products are currently being used within a wide range of industries such as oil and gas, shipping, construction, renewable energies, lifting and cranes, mining, staging, test and inspection, and military applications. Products are available to buy or rent. www.straightpoint.com

Continue Reading
Cable MonitorsCableSafeNATE
1,512
Share LinkedinTwitterFacebookEmailWhatsApp
Subscribe to our newsletter
Sign up here to get the latest news, updates and special offers delivered directly to your inbox.
You can unsubscribe at any time